The draw for the EHF Women's Champions League 2010/11 season was carried out on 13 July 2010 in Vienna by Kay-Sven Hähner, member of the Women’s Club Board and EHF Secretary General Michael Wiederer.

The teams have been drawn in order of the possession of the right to organise the tournament, starting with the uppermost. If the team declines, the right is passed on downwards row by row. The tournament will take place on 03/04/05 September 2010.

The teams in row 3 of each group have been drawn to possess the right to organise the respective tournament. If they decline, the right is passed on to the teams in row 1, then row number 4 and finally row 2. The four tournaments will take place on 17/18/19 September 2010. 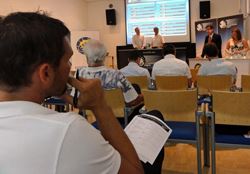 The Group Matches are planned to take place on 9/10 October, 16/17 October, 23/24 October, 6/7 November, 13/14 November and 20/21 November 2010. Please note, the Regulations of the 2010/11 EHF Women’s Champions League includes a basic playing schedule. However, this playing schedule may be modified following talks to media partners. The finalised schedule will be published in due time.

The teams ranked first and second in every group proceed to the Main Round which will be drawn on 23 November 2010.