Anja Althaus might have retired after last season, the three-time EHF Champions League winner (Viborg 2009 and 2010, Györ 2018) has never really left the court.

Right after she ended her career after the 2017/18 season, she was back on court of Europe’s top-flight competition. Not as a player, but as an ambassador.

The 36-year-old former line player gives an exclusive behind-the-scenes look at EHF Champions League matches, clubs and players, and brings fans much closer to the stars via the social media channels of the EHF and the hashtag #anjaisback.

The 242-time German international talks to ehfCL.com about the project, about the reactions of the players, and about her emotions when she enters the arenas with a complete different perspective.

Anja Althaus is back ! She is our WOMEN’s EHF Champions League ambassador and what a better place than Györ to return? #anjaisback

ehfCL.com: How did you get involved in this project?

Anja Althaus: I had been invited to the VELUX EHF FINAL4 in Cologne by EHF Marketing twice, and last year I was a little part of the programme with some interviews and things like that. I had just finished my career for the second time after winning the trophy with Györ, and I was looking for a new challenge combined with handball. Then I talked to David Szlezak, the managing director of EHF Marketing, and somehow #anjaisback was born. Maybe they liked my style, I am open-minded, and as I played in Germany, Denmark, Macedonia and Hungary, I speak some languages, I know many people. So they asked me to become the ambassador - and I said ‘yes.’

ehfCL.com: What is the job description for an EHF Champions League ambassador?

Anja Althaus: This project is a new social media platform for women’s handball. I am accompanied by a mobile reporter and I look behind the scenes of the teams, I interview players, I just give an in-depth view of this great sport. I want to show the world the great persons behind the players, I want to show their characters and why they are role models for young people. I simply want to engage the fans and bring them this Champions League feeling from the arenas to their homes.

ehfCL.com: How were the reactions of players and clubs when you arrived in your new role?

Anja Althaus: The funniest thing was my start right in Györ, where I had finished my career some months ago. They heard I am back in Hungary, they saw the hashtag #anjaisback - but they really did not know what my plan was. Then I came into this arena, the fans were shouting my name, it was such a brilliant feeling to be back on this stage. So for me it is absolutely cool, and what I heard from the players and the clubs is that they really love this format. They know me, they know that I know the business and I know how far I can go behind the scenes, for example not disturbing the match preparation. In general the feedback has been outstanding.

ehfCL.com: Were you nervous for your first interviews?

Anja Althaus: Oh yeah. But it is like starting any new job: as soon as you know what to do, you get more relaxed and secure in everything. When I had my first visit as ambassador, I arrived at the arena with my head full of question marks. What shall I do? Will everything be perfect? What will happen? I was running through the arena like a chicken picking corn. And to be honest: It was such an emotional moment for me, as exactly then I realised that my time as a player was definitely over. Those were truly wildly mixed emotions. But now, after 10 matches as an ambassador, it feels great.

ehfCL.com: What makes the difference when a former player interviews players?

Anja Althaus: They know that I know how it feels. Just a simple example: You play a brilliant season at your club before moving to a bigger club abroad. The expectations are huge, but this transfer is much more than just moving from one city to another - and quite often players cannot fulfil the expectations from the start, because everything is new: the players, the coach, the language, the culture, simply everything. So when I interview a player who has just changed the club, I have this background. And I guess I can show the fans what is behind a player and a club. And I really love the feedback and the fan questions - so please send me more! We are here to interact.

ehfCL.com: Are there any restrictions to your work, for example filming in the locker room?

Anja Althaus: Of course I am curious, and of course I want to show the fans how a locker room looks like before a match. But I know how far I can and shall go. The players, coaches and clubs know that I have no evil intentions, but just want to promote our great sport. And of course I know when a player does not want to be interviewed, either during preparation or after defeats. I have a quite good sense for it from my own experience.

ehfCL.com: Has this job, which keeps you part of the competition in a different way, made your retirement as a player easier

Anja Althaus: Yes! I have arrived in my old world but in a new world. Sounds a little bit crazy, but it exactly expresses my feelings. It is definitely not easy to end a career, but sometimes you have reached this point to say: ‘It’s over now.’ As a Champions League ambassador I return to all those great arenas, and every journey to a match for me feels like coming home, back in the old world. Handball has left its mark on my life, I have been a professional player for 18 years and now I want to contribute in a different way.

ehfCL.com: Are there any other job options inside or outside handball for you at the moment?

Anja Althaus: I am working on my coaching license, but at the moment I do not feel like becoming a coach immediately. This life in a hamster wheel, which I have just ended, would start again. So time will tell… 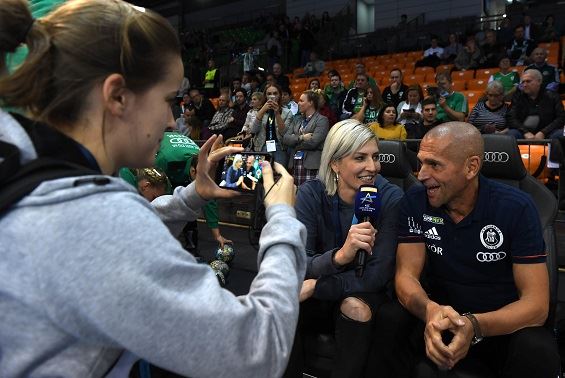 ehfCL.com: Will there be some special tasks for you at the DELO WOMEN’S EHF FINAL4?

Anja Althaus: It is the final destination of a long journey for the clubs and the players. The tension will rise, the players will be highly focused as they all have do-or-die matches ahead. This thrill is what I want to show the fans. And for me personally it is simply brilliant that I am still part of this great event.

ehfCL.com: What are you looking forward to the most in Budapest?

Anja Althaus: To enjoy this spectacle. As a player, you are in a tunnel when you arrive at an event like the DELO WOMEN’S EHF FINAL4. Now I have the chance to see the shows, the whole entertainment around it, and to see what the fans see.

ehfCL.com: Last year you won the trophy with Györ. This time your former club face Kristiansand in the semi-final. Will it be an easy task for the defending champions?

Anja Althaus: I guess Györ are in the favourites’ role and I am quite sure that they make it, due to their experience they gained at so many top events. They know what it needs to win crucial matches and trophies. But they have to be aware. Vipers have nothing to lose. This can be a dangerous situation for Györ.

ehfCL.com: And what is your prediction for the second semi between Rostov and Metz?

Anja Althaus: This is a very, very, very tricky question. Usually, I favour the underdogs, which Metz are in this case. There are some reasons which speak for them, like they have beaten Rostov twice, they have a great team. But the main question is, how they can cope with all the surrounding aspects, the atmosphere, the pressure, and so on. Rostov have made this experience already in 2018, this is their advantage, and their team is of top quality. And of course a final of Ambros Martin against his former team Györ would be the icing on the cake. So I really have no answer…

ehfCL.com: But your prediction for the team on the winner’s podium is again Györ?

Anja Althaus: Under normal circumstances, they only can beat themselves. But in EHF FINAL4 matches, 10 weak minutes can decide everything. So you have to keep 100 percent focus on 120 minutes if you want to win this trophy and to stand the pressure.

Previous Article Martin: "We need some magic in Budapest"

Live blog: round opens with wins for CSKA, Dortmund and Vipe…