EXEC confirms participants for the 2018/19 season

EXEC confirms participants for the 2018/19 season

The line-up of the teams for the Women's EHF Champions League 2018/19 has been confirmed after the EHF Executive Committee in Glasgow, Scotland has decided on all teams starting either in the group matches or in the qualification tournaments.

14 teams have been directly seeded for the group matches stage, while further eight sides including the 1995/96 winners HC Podravka, the reigning Women’s EHF Cup holders SCM Craiova and current Challenge Cup holders MKS Perla Lublin, will vie for the two remaining places in the qualification (7-9 September).

In total five former champions - Györi Audi ETO KC (HUN), Buducnost (MNE), Larvik (NOR), CSM Bucuresti (ROU) and RK Krim Mercator (SLO) have been confirmed for the group matches, while at least two newcomers (both from Denmark) – Kobenhavn Handball and Odense HC will be on the starting grid of the competition's first round on 5-7 October 2018.

EXEC confirmed four requests for upgrades of the EHF Cup clubs to the European top flight. The 2011 champions Larvik and Brest Bretagne Handball have been seeded directly for the group matches, while two others – SG BBM Bietigheim (GER) and SCM Craiova (ROU) will start in qualification. 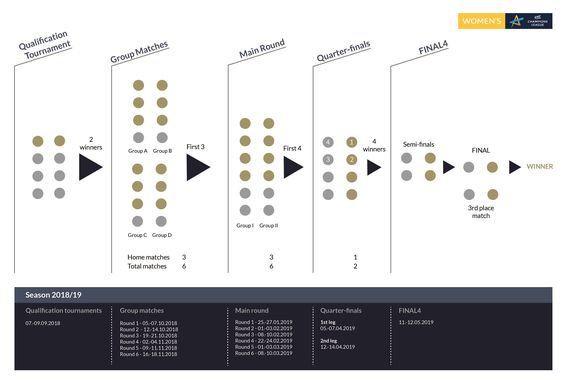 The playing system has been introduced already before the 2014/15 season. There will be just one qualification round with two groups before the group matches. The main round will consist of twelve teams (two groups of six).

The top four teams from each main round group will then qualify for the quarter-final knock-out phase, before the final remaining four teams compete in the season high point, the Women's EHF FINAL4.

The seeding list and the draw procedure of the first draw event of the season will be published at the later this week.

The group matches draw will be hosted on Friday 29 June at 12:30 hrs at the Erste Campus in Vienna and will be streamed live on ehfTV.com, ehfTV YouTube channel and on the competition's Facebook page. 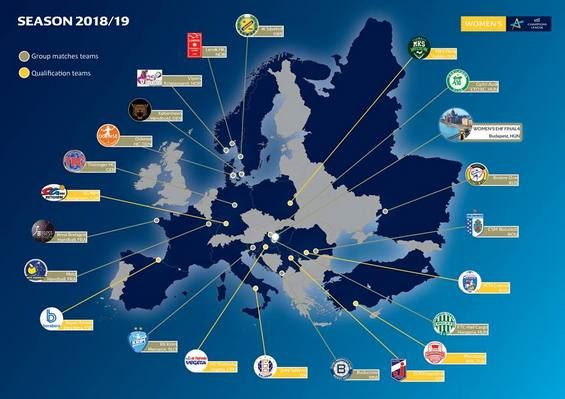 Next Article Wiederer: "A congress with huge significance for European and Scottish handball"

This is me: Valérie Nicolas

THIS IS ME: The career of French goalkeeper Valérie Nicolas was marked by persistence - and fun. She tells her story in her own words

GROUP B REVIEW: Elverum are a tough nut to be cracked, but Kielce take their fifth straight win

GROUP A REVIEW: After GOG lost in Paris on Wednesday, Magdeburg are now a comfortable third and beat Porto in style

GROUP A REVIEW: Bucharest win crucial home match against Plock and pass their opponents in the ranking

GROUP B REVIEW: After six straight wins, Barça give away their first point in Kiel

Veszprém finish first part of the group phase on a high

GROUP A REVIEW: Thanks to a tight win against Zagreb, Veszprém remain undefeated and will start the return phase as group leaders

SUMMARY: The Machineseeker EHF Champions League has returned with three matches on Wednesday and five on Thursday

GROUP A REVIEW: In one of the highest-scoring games of the season, Paris Saint-Germain took 40 minutes to gain the upper hand over GOG