From Vardar to Györ - via Cologne

From Vardar to Györ - via Cologne

Four weeks ago, the tears were floating like a river at the Papp Laszlo Arena in Budapest.

In the dying minutes of extra-time in the final of the TIPPMIX EHF FINAL4 Anja Althaus and her HC Vardar side lost against Audi ETO Györ and when the final buzzer sounded, the career of the 34-year-old German line player seemed to be concluded.

“I was so emotional, as I knew this was it,” said the two-times Champions League winner Althaus (2009 and 2010 with Danish side Viborg) about her retirement announcement. “We had one hand on the trophy already, but we missed the title.”

A month is a long time in handball
Four weeks later, in Cologne, and Althaus has a smile all over her face – a major turning point occurred after the TIPPMIX EHF FINAL4.

“I received a phone call and was asked by Györ if I want to join them,” she explained. “I had complete chaos in my head as the plans for my future had been completely different.

“But then I said yes as it was a once-in-a-lifetime opportunity.”

Althaus signed a one-year contract at the current and three-times Women’s EHF Champions League winners, but before moving to Györ, she was guest of the EHF at the VELUX EHF FINAL4 weekend in Cologne.

On the Friday night Althaus took part in the players’ quiz show, ‘Let’s Get Quizzical’, and on Saturday and Sunday she enjoyed top handball from a new perspective for her.

“It is absolutely brilliant to have the chance to see this event,” said the former German international. “I have never attended before and it is a great honour for me to be here. Usually you arrive at a FINAL4 tournament full of pressure, but now I am totally relaxed and had the opportunity to chat with people, to see behind the scenes - what normally is impossible when you are part of a FINAL4 as a player.

“This weekend was a great experience for me, this was a mega event and I am really looking forward to the 2018 edition.” 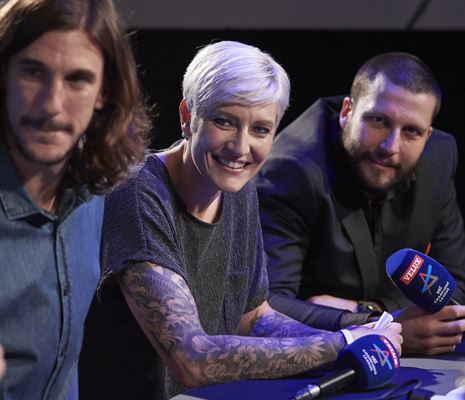 Althaus sees a Vardar win
Finally, Althaus could celebrate the unexpected title for the men’s team of her former club Vardar, who beat Paris Saint-Germain Handball in the final with just seconds remaining.

“They were the best team during the whole event and fully deserved to win,” she said. “I had crossed fingers for them and before the final against PSG I had predicted that they will it win a one-goal margin - and they did.”

A Macedonian celebration
On Tuesday, 150,000 people in Macedonian capital Skopje were on the streets to celebrate the homecoming of their heroes while Althaus was in the middle of packing her things for her move to Lake Balaton in Hungary, but took time to praise the club, she had played for over the last three seasons.

“After we lost our final in Budapest, the men made their dream and especially the dream of our club owner Sergej Samsonenko come true,” she said. “He invested so much - but most of all, I really feel happy for the country, for the Macedonians, for the fans. Handball means so much to them.”

“I asked Györ to give me some time to decide as on the one day I said yes on the other I said no,” explained Althaus. “But after my performance at the FINAL4 I felt that I am still fit and still can fulfil the tasks of a major club.

“I am not too old and I still know how it works so it was crazy, but also great to get this offer from Györ.”

After lengthy discussions with her boyfriend, a businessman in Skopje, she agreed. “He stays in Skopje but thanks to the great flight connections he will visit me quite often.”

A new chapter
And she hopes everybody can understand her decision. “In a very emotional way, I announced to finish my career after the final in Budapest, but then I got this great opportunity, I would never have dreamt of this before, so it was anything but planned to join Györ.

“I truly had closed the chapter handball in my book of life. But now it is open again.”

Finally, a lot of friends encouraged her to say yes to Györ. “When they told me that Michael Jordan did the same – returned after his official announcement of retirement – it was clear that I should grab this chance.”