Things have gone very well for Viborg HK in the Women’s EHF Cup this season.

After qualifying for the group phase without any real problems, the Women’s EHF Champions League winners from 2006, 2009 and 2010 have won their first two matches in Group C. Viborg won the first match, the Scandinavian derby at Larvik, 31:28, having been clearly in the lead all the way. In the second match, Viborg sent E. S. Besançon Feminin home with a 35:26 defeat.

One of the key players for Viborg is Danish international Kristina Jørgensen, who turned 21 on Thursday. Jørgensen’s career has really speeded up after she joined from league rivals Skanderborg Håndbold in 2017. The talented left back and playmaker has already developed into a regular in the Danish national team, and for Viborg, she is also crucial.

“I can only be content with our two first group matches. In Larvik, we played extremely well in the first half in particular, and even though we were not able to keep our lead that big all the way to the end, we could still be content with our performance,” Jørgensen says. “Against Besançon, we were actually in control all the way and played a very fine home game.”

A great deal of international experience

Jørgensen has already gathered a great deal of international experience with the national team as well as from the European games with Viborg.

“It means a lot to me to play the EHF Cup. It develops me much to play against strong opponents from all over Europe and to meet different ways of playing. That gives me some experience, from which I feel I can also benefit in the national team,” she says. 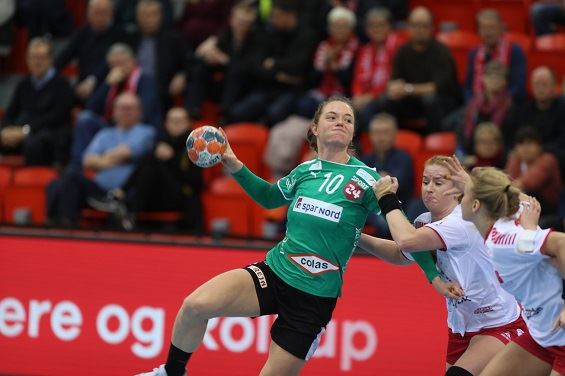 While the Danish side has started flawlessly in the group phase, Jørgensen is a bit in doubt about how far her team can actually make it in the EHF Cup this season.

“We have got a good start, of course, but it is still hard to say how far we can get. There are many good teams in the competition,” she says. “We play so many matches at the moment in the Danish league and EHF Cup, that it can be hard to maintain the overview.”

Regardless of how Viborg’s future in the group pans out, the first goal of the season has been achieved.

“Our first objective was to reach the group phase. We have accomplished that, and right now, we just aim at winning as many games as we can,” says the talented and versatile backcourt player.


"We have to focus on ourselves and our own game"

Next up for Viborg is the other team in Group C with two wins from two matches, Kuban. The match in Krasnodar is scheduled for Saturday at 14:00 CET (live on ehfTV.com).

“They have done almost as well as we have, and there is no doubt that they have a very strong team. I know several of their players from the junior national team, and they are really good,” Jørgensen says.

The strength of Kuban leaves her “a bit in doubt” about Viborg’s chances of continuing their winning streak.

“It is a difficult away ground there, but I think we will simply have to focus on ourselves and our own game and see, what it brings,” she says. “It is obviously a top game I am looking very much forward to.”

Next Article EHF EURO 2018: No further sanctions for Pineau