Two years ago, Sweden took the gold medal at the M18 EHF EURO and the top scorer in the competition was playmaker Ludvig Hallbäck. In a team filled with talents, Valter Chrintz has received the most praise – but do not overlook Hallbäck.

The 19-year-old would have been one of the most interesting players to follow during the M20 EHF EURO 2020 in Italy and Austria this summer, but seeing as the tournament has been postponed until January 2021 and relocated to Croatia amid the COVID-19 pandemic, we will have to wait a little longer to see Hallbäck play.

Born into a handball family

There was no question as to whether Hallbäck would play handball or not when he grew up. His mother Lena played for both Warta and Kvik Sport in the women’s league in Sweden, and his father Jerry was part of Sweden’s famed golden generation, the ‘Bengan Boys’.

Hallbäck was born on 27 October 2000 – four years after his brother Anton. It was not Lena or Jerry but Anton who was ‘Luddes’ biggest influence growing up.

“I started playing handball when I was just five years old; a year earlier than what was allowed. When my dad, mum or brother had practice or played games, I spent a lot of time with them in the arenas,” says Hallbäck.

“The fact that both my parents and my brother played had a big impact on me. I looked up to my brother and wanted to play. But the biggest reason I continued play was because of how fun handball was.”

Ludvig tried both ice hockey and football, but pretty soon his life revolved around handball.

“Neither ice hockey nor football were as fun as handball. Why is handball more fun? There is a lot more action during a handball game and also more goals,” he says.

Instead of playing football or ice hockey simultaneously and combining it with handball, Hallbäck turned all his focus to handball. At a young age, he started following his dad, then a sports director, to his work.

“It was pretty cool being able to follow my dad to work, but I was probably an annoying kid,” Hallbäck laughs.

“It has been incredibly educational growing up in a family where everybody loves handball.”

An idol in Mikkel Hansen

All handball players have role models and when you see Ludvig Hallbäck play, it is easy to see why he idolises Mikkel Hansen. Hallbäck used to watch YouTube videos of the Danish star. At that point Hallbäck did not know that, only a few years later, he would move from HK Aranäs to Ystads IF and play with another one of his idols: Kim Andersson.

But Hallbäck is not as tall as Hansen or Andersson and therefore has to play a bit different to his idols.

“I have never been the type of player that can shoot over two defenders trying to block the shot. Instead I have to be smart and tricky when it comes to taking my own shot.”

Still, Hallbäck scores a lot of goals and ranks in the top 10 in the Swedish domestic league every year when it comes to goal scoring. One of the reasons for his big success is his quick feet. Almost every game, he sends a defender or two toward the stands thanks to his quick movement.

“During my last years in Aranäs, before I moved to Ystad, I really started to develop that part of my game. It’s not as easy nowadays – every team we play against is familiar with my moves and therefore I always have to develop my game to be a more all-round player,” Hallbäck explains.

A student of the game

Hallbäck is a student of the game. When he moved to Ystad, he did it with his family. Big brother Anton already played for YIF and their dad became the new manager. Hallbäck has spent a lot of time with his dad watching film from games.

“I have always enjoyed watching handball and when my dad has cut games for us players, I have found it super interesting watching it.”

Even though Hallbäck has been a huge success in the Swedish domestic league, he is in no rush to move abroad.

“The important thing for me is to be ready. I want to be ready as a player and also physically when and if I go pro. Someday I want to play abroad, but I don’t have a dream club – what I need to have is a good feeling for the club,” says Hallbäck.

This summer, Hallbäck was expected to dominate for Sweden once again, during the M20 EHF EURO 2020, but the COVID-19 pandemic made that impossible.

”Of course, we would have liked to play, especially since we didn’t play in any championship last year. But there is nothing we can do about it and I completely understand the decision to postpone the EUROs. Let’s hope that COVID-19 disappears so that our societies can start working as normal again and we can start playing handball.” 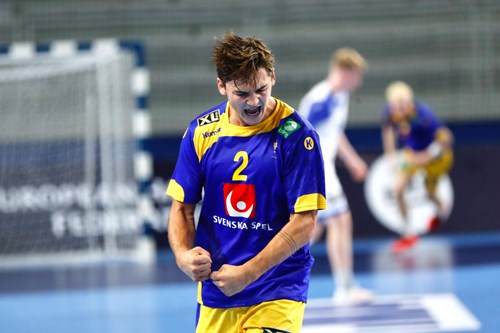 The golden generation in Sweden

The last time the Sweden team built with players born 2000 and 2001 played in a major tournament, they took home the gold medal. This year, they would have been one of the favourites once again.

“We have great team chemistry. Back in 2018 we had a tough start to the competition when we lost the first game against Iceland, then we felt like we had nothing to lose and played well during the main round. In the final we faced Iceland again and really wanted revenge,” says Hallbäck.

“Lifting the trophy was amazing and I was glad to help my team. When I think back I feel really proud.”

When asked if Sweden has a new golden generation, the humble Hallbäck does not really know what to say, but he agrees that the players from the gold medal-winning team in 2018 have a bright future ahead. Chrintz has already played with the national A team in a championship; Hallbäck awaits his turn.

“I don’t play defence and that’s a huge deal. I want to be a two-way player, especially since our sport goes faster and faster and soon there won’t be much time to make any changes,” says Hallbäck.

“It’s my dream to play for the national team and I really hope to make it there in the future.”

Next Article What is the temple of club handball?

PREVIEW: Austria, Iceland, Serbia, Slovakia, and Slovenia will play a qualification tournament in Serbia in November 2021

NEWS: The two countries lead the Younger Age Category ranking after all W17, W19 and M19 events this summer have been played

A glimpse into the future with YAC All-star teams

NEWS: An overview of the outstanding players at the recent Younger Age Category EHF EURO and Championship events

Faroe Islands, Montenegro and Poland join the top tier in 20…

SEMI-FINAL REVIEWS: Germany won an exciting first semi-final by one goal, while hosts Croatia also booked their place in the final

DAY REVIEW: Spain join Slovenia, Germany, and Croatia among the last four of the championship