Neither Rostov nor FTC have made it to the EHF Champions League FINAL4 before, and the Russian champions were clear favourites following their 31:29 win last week in Dabas.  While FTC hoped for a small miracle in the second leg, that was not to happen as Rostov dominated and won once again, this time 32:22.

Vardar make it to yet another EHF FINAL4 in Budapest after an emotional win over FC Midtjylland; an 11-goal performance from Anita Görbicz saw Györ take another win against Buducnost, 30:28

FTC's hopes for a spectacular revenge were destroyed already in the first half. During the current European campaign, Rostov have not dropped a point on home court, and they put on another solid performance in front of their crowd.

Just like in the first leg match, Anna Sedoykina did very well in goal, and her string of saves helped Rostov to score from fast breaks.

Iulia Managarova, Anna Vyakhireva, Ana Paula Rodrigues and their teammates were impressive in attack, and the home side's eight-goal lead at the break left FTC no realistic chance for a miracle.

In the second half, Rostov replaced Sedoykina by Mayssa Pessoa in goal. Besides, they lost Katarina Bulatovic - the Montenegrin got a red card for throwing the ball to the goalkeeper's face.

However, nothing was threatening to the Russian team's victory.

Once again, FINAL4 will take place without the team representing the host city of Budapest.

Frederic Bougeant, head coach of Rostov-Don: "This is a historical moment for our fans, administration, and players.

"It’s been a hard year, and hard work. I’ve told my girls to imagine that we lost our first game by minus 5 goals.

"I watched football Champions League several days ago, is was one of the reasons for this decision.

"Also it’s a great achievement that 21 players were preparing for the game, without injuries."

Elek Gabor, head coach of FTC-Rail Cargo Hungaria: "Rostov-Don were better than us in many components: in speed, in defense.

As expected after the first leg victory in Denmark, in a match full of emotions, the players of the Macedonian champion Vardar in tears celebrated the victory 32:25 (17:12) against FC Midtjylland in the last Champions League at home side.

With the result Vardar reaches the Women’s EHF FINAL4 in Budapest for the fifth consecutive time, while FC Midtjylland, with two defeats in the quarter-finals, are eliminated from the competition.

Just few hours before the start of the match, the social media was flooded with plenty of sentimental posts from Vardar players and fans due to the hosts’ last Champions League match in the “Jane Sandanski” arena.

Both teams made several mistakes at the beginning of the match which resulted with intense fight on the court.

However, in the middle of the first half Vardar found their rhythm and with Andrea Lekic forth goal reached three goals gap for the first time in the match.

Only three players from FC Midtjylland wrote their names in the scorer list in the first half as Veronica Kristiansen scored eight of 12 FC Midtjylland’s goals before the break.

On the other side, Vardar played as a unit and pulled five goals ahead in the first half 17:12.

Vardar started with high tempo in the second half as Amandine Leynaud was multiplying saves between Vardar posts.

The Danish side, however, continued with their mistakes and lost the courage early in the second half which soon brought 13 goals gap for the Macedonian side.

Finally, in the 45th minute Kristiansen scored the first goal for FC Midtjylland in the second half.

With this poor performance it was more than obvious that the Danish site gave up the fight early in the second half and one waited for the final whistle.

Until the end, Vardar demonstrated superiority and celebrated high score victory 32:25 as all fans in the arena chanted out loud “Vardar champions” for the hosts last match at home side in the Champions League.

"They are strong and we knew this from the beginning. We played good in Denmark and we had a good beginning here also but once more with had 15 minutes in which we didn’t score any goals and this was decisive at the end.

Irina Dibirova, Vardar coach: "This was an emotional match and we wanted show great performance in our last game at home.

"We had problems in the first half with Kritsiansen but in general I’m happy with the result.

"We all knew that we have to play in the FINAL 4 and I’m proud of my team.“

Andrea Lekic, centre back Vardar: “This was a special match for us. I’m going to miss this court, fans and everything else here.

"This will be our last competition, which gives us special motivation to win the title this year”

Helped by a six-goal lead from the first leg, Györ needed to keep calm and keep Buducnost in check, as the Montenegrin side needed everything to break in their favour to progress to the Women’s EHF FINAL 4.

Having to navigate through an injury crisis, the Hungarian side needed to master their start and they took a 6:4 lead thanks to a strong first 10 minutes from Eduarda Amorim and Anita Görbicz.

The young Montenegrin side started to slowly weather the storm and took a 10:8 lead, with a flawless Tatjana Brnovic leading the charge. The 19-year old line player scored five times, but Györ were strong enough in attack to tie the game at half-time, 15:15.

A strong start to the second half saw Buducnost take a 21:19 lead. But a 3:0 partial, spurred by an excellent Anita Görbicz, saw the hosts turn the game on its head, 22:21.

The iconic playmaker, who started the season on left wing, but was reverted to her position due to the flurry of injuries, scored 11 times, helping the Hungarian side reach the last phase of the competition.

It was no turning back for Buducnost, who won only once in seven tries on Györ’s home court, as the Hungarian players cheered their fourth Women’s EHF FINAL 4 berth with their own fans, which will surely follow them to Budapest. 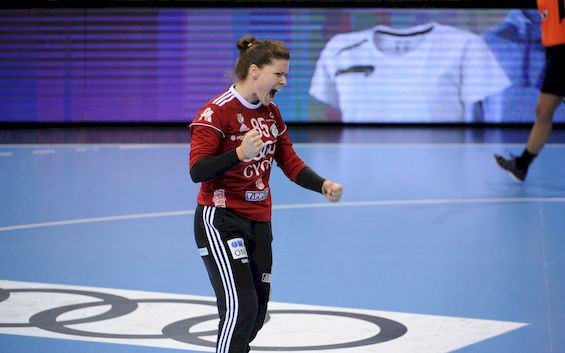 Next Article Bucharest are defeated in Metz but take FINAL4 ticket