When the COVID-19 pandemic stopped play and left handball courts across Europe empty in mid-March, a busy period for the Dutch Handball Association (NHV) started.

The NHV was quick to realise how the pandemic would affect the sport for months to come and immediately started planning ahead, which is why it is the focus of the first article in our 'Back to handball' series.

As soon as restrictions on sport for under 18s were eased by the local government on 1 June, a series of 150 handball clinics throughout the Netherlands were ready for throw-off.

And as of last Wednesday (1 July), all measures that limited indoor and outdoor sports and that made playing handball impossible have been lifted in the Netherlands.

“We already expected in March that children would be the first to be allowed playing again, so we started organising a handball summer for kids right away,” says NHV President Tjark de Lange.

Coaches and players from the Handbal Academie, the Papendal-based training centre for the sport’s biggest talents, are travelling around the country to showcase the sport and get kids involved. 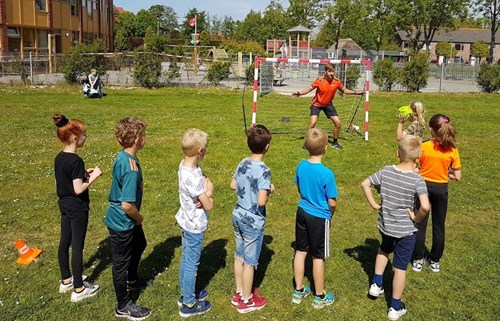 The NHV had previously been thinking about youth clinics in the summer, but the project was catalysed to a much larger scale with the coronavirus outbreak.

“We see that clubs are really getting new members thanks to this,” De Lange says.

Further measures by the NHV during the pandemic included providing national team members with materials for physical training, online fitness sessions live on Facebook by Handbal Academie coaches, and instruction videos for players wanting to improve their handball technique at home.

“We have been looking to the future all the time,” De Lange says.

Do not get him wrong, though – the NHV President did not like the abrupt end necessitated for the 2019/20 season at all.

Still, it was the best season in the 85-year history of the NHV, with the national women’s team winning the world title in Japan in December 2019 and the men’s side taking part in the EHF EURO for the first time the following month.

“It is a shame that the women have not been able to capitalise over the past seven months. They could have been in a seamless flow into the Olympics,” says De Lange, referring to the Tokyo Games, which have been postponed until 2021.

Even more highlights were approaching, but had to be cancelled.

The men’s team finally had a chance to qualify for a World Championship in a play-off tie against Austria.

The women were set to play an EHF EURO qualifier against Spain in a highly anticipated rematch of the World Championship final, for 15,000 fans in the sold-out Ahoy’ arena in Rotterdam.

But the situation also hurt for the clubs and the domestic leagues.

“The end of the season is always the best part, with all the championships and the trophies. It is a truly dissatisfying end to the season, but we said right away: let’s look forward,” De Lange says.

The NHV was among the first associations in Europe to call all its competitions for the season off: no restart, no champions.

“We have seen a lot of wishful thinking at other associations, but we didn’t want to be led by emotions,” De Lange says.

Looking to the situation in China, the NHV were aware that the pandemic would affect the sport for at least the next three months.

“And you don’t restart a competition at the end of June, when people are planning to go on holiday,” says De Lange, admitting that the lack of a professional handball league in the Netherlands made that decision easier.

“Strangely enough, we got a lot of positive responses,” he adds. “The situation was immediately clear to everyone and the clubs could start thinking about next season right away.”