Paris take second place thanks to win in Celje

Paris take second place thanks to win in Celje

Since Szeged had only managed to take a point yesterday against Aalborg, Paris Saint-Germain had the opportunity to join the Hungarian side in second place in Group A.

But the only condition for that was the French side had to win this afternoon against Celje.

The Slovenian side, on the other hand, were looking for a fourth victory this season.

For Celje, beating Paris was not going to be an easy task, though, as the first leg of the confrontation between the two teams had resulted in a clear Parisian win (27:18).

Meanwhile, the tournament's Spanish powerhouse looked rusty and needed more than 20 minutes to get to full speed, but as soon as they got the lead, they never looked back against Elverum, 30:26.

With three games left in the group phase, Barça opened a two-point gap ahead of PSG Handball and MOL-Pick Szeged, as the Spanish giants are the favourites to win their group for the second season in a row.

Despite missing Luc Abalo, Luka Karabatic and Henrik Toft Hansen, who all stayed at home due to injuries, and not using Mikkel Hansen and Nikola Karabatic, Paris were still dominant all throughout the first half.

Their aggressive defence forced Celje to turn the ball over five times in the first thirty minutes, and the Parisian side was clinic offensively on the other side of the court, Kamil Syprzak being a real poison for the Slovenian defence.

In the wake of their Polish line player, Paris took a three-goal lead shortly after the 15th minute and kept it all the way to the break, even improving it a little bit just before the buzzer, thanks to an Adama Keita in-flight goal right before the half (13:17).

The break seemed to have been useful for Celje to talk things over, as the Slovenian side came out roaring from the dressing room.

Thanks to Tilen Kodrin and David Razgor, Celje came back to within one after just ten minutes. But Paris regained their momentum quickly, partly thanks to Rodrigo Corrales’ arrival between their posts.

The Spanish goalkeeper stopped three straight shots and, a couple of seconds later, Sander Sagosen had given Paris their four-goal advantage again.

The finalists of the VELUX EHF Champions League 2017 were never to be seen again, as their experience was enough to retain their lead.

With this four-goal win (33:29), the French side is now on par with Szeged before the clash between the two next week.

At the other end of the standings, Celje are stuck in sixth place.

PSG coach Raul Gonzalez was proud of his side's performance, “We are very satisfied, we started great and got four, five goals difference, but then Celje came back. They have played really strong and we had to show our strength. I am proud of how the team reacted and got points here.”

Tomaž Ocvirk knew his Celje team would not be able to get away with any slip-ups today, “We were not bold enough in first half in attack, had too many turnovers and a team like PSG does not forgive that. We came back strong in second half, but PSG was just too much of an opponent. I have to be happy how my team reacted and fought until the very end in this great atmosphere.” 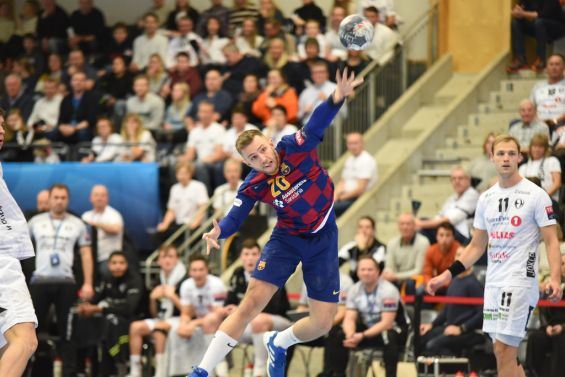 The most efficient attack in the VELUX EHF Champions League, Barça, looked eager to pick up where they left off before the EHF EURO 2020 break, yet they were in for a surprise against Elverum.

The Norwegian side, who eyed Celje’s sixth place, had a superb start to the game, after a 4:0 unanswered run between the 13th and the 15th minutes saw them take a 8:6 lead.

But they did not stop there. With ten players getting on the scoresheet, but neither of them scoring more than two goals apeice in the first half, Elverum were cruising to a 13:10 lead after 22 minutes.

However, Barça were not done and dusted. Finishing the half with a stormy 6:1 run, as wing Aleix Gomez Abello scored three times, the Spanish champions got back into the game and had taken back the lead at the break, 16:14.

For Barça the plan was simple: grow the gap and use their superior squad depth to secure another win, their tenth in a row in the VELUX EHF Champions League.

But Elverum showed they were no pushovers, enjoying one of their best games of the season.

As they did countless times this season, Barça preyed on Elverum’s missed attacks and launched devastating fast breaks, with wings Aitor Arino and Aleix Gomez Abello topping the scoresheet with six goals apiece.

The gap never went lower than three goals and Barça’s depth did its job in the final moments, as the Spanish side sealed a 30:26 win, all while hitting their lowest number of goals scored since the first round, when they only had 28 in the loss against Szeged.

Elverum coach Michael Apelgren had the highest of praise for his opponents after the match, "For me Barcelona is the best team in the world, and it has been the the best team in the world for many years. I have really big respect for how they are working, and what they have been doing. A lot of coaches and also me are looking to Barca for what are doing and trying to steal some good things."

Next Article Brest march on to eighth win against Sävehof