MT Melsungen and SL Benfica got their Men’s EHF Cup group phase campaign off to a convincingly winning start on Sunday.

Melsungen downed Gwardia Opole 26:21 on home court while Benfica came away from Denmark with an even bigger win against Bjerringbro-Silkeborg, 33:24.

The first five minutes of the game were not a good indicator of what was going to happe. The home side took a quick three-goal advantage, including three penalties from Johan Hansen, but the Danish momentum did not last long.

With the help of Petar Djordjic and Kevynn Nyokas, the Portuguese side rapidly turned things around, making the score even at the 10th minute before not conceding a goal for the next 10 minutes.

Relying on their defensive effectiveness, the visitors were able to cruise away. With Paulo Moreno scoring his third goal on the buzzer, Benfica were ahead by three at half-time (14:11).

While Silkeborg had showed some offensive problems in the first half, their mistakes after the break were constantly punished by the Portuguese side.

Benfica’s backcourt, especially, was on fire, with Belone Moreira and Petar Djordjic scoring a combined 17 goals as the Portuguese lead increased throughout the second half.

A 10-goal margin was never reached but Benfica celebrated a perfect start to the group phase.

“We played a really good match today, especially in defence and in the last part of the match,” Benfica head coach Carlos Resende said.

The hosts, however, faltered after a promising start to the match.

“We had a reasonable beginning. We are both irritated and a bit surprised about the outcome. It is not OK to lose by nine goals,” said Bjerringbro team captain Michael V. Knudsen.

Melsungen appeared on their way to force an early decision as the hosts built a five-goal lead (8:3) in the first 12 minutes.

At this point, Melsungen’s defence was perfectly set while their offence was clinic. Roman Sidorowicz and Dimitri Ignatow were firing on all cylinders, but somehow the German momentum ended after 25 minutes.

Opole used the opportunity to come back within two at the break (12:10) and even leveled the score at 16:16 in the 40th minute following a red card for Timm Schneider.

Patryk Mauer and Mateusz Jankowski were important in the strong period for Opole, scoring a combined 13 goals. 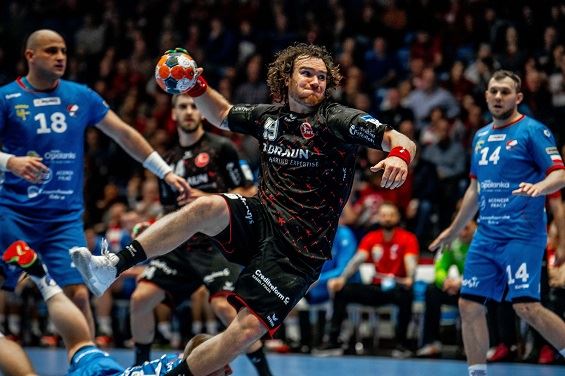 But Melsungen went back on top in the last quarter. With some crucial saves from goalkeeper Johan Sjöstrand, the German side swiftly increased its advantage again.

Opolo could not mount another comeback in the match, as the hosts rounded off their victory with a five-goal margin.

Next Article Paris take second place thanks to win in Celje