Like his teammates at Barça Lassa, Thiagus Petrus Goncalves Dos Santos believes the club can do something big in Cologne next week.

“We’re going to give our 100 percent,” the defender says. “We have our chances. Everything can happen in a match. Vardar are a strong team, but if they want to beat us, they will have to deserve it.”

In his first season with Barça, Petrus is counting the days until the VELUX EHF FINAL4, where his team will take on HC Vardar in the semi-final on 1 June at 18:00 hrs (live on ehfTV.com).

“It will be my first EHF FINAL4. Everybody says it’s amazing,” he says. “I’m really nervous for the moment but also ready, of course.”

Petrus arrived from MOL-Pick Szeged in the summer of 2018. He needed little time to adapt to his new team, whose defence has vastly improved since the Brazilian’s arrival.

“I think defence will be the key. If we are OK, our goalkeepers help us and we can run fast breaks, we will have a high possibility of beating Vardar and playing the final,” he says.

“With Fabregas, and also with Sorhaindo, I have a good connection and together we are strong,” Petrus says. “To be a good defender, you must want to defend. And we have a great desire to do that.”

A mix of physique and intelligence

Barça’s semi-final opponents Vardar are a team with a good defence, in the eyes of Petrus.

“They are a mix of physique and intelligence, and it makes them strong and dangerous,” he says. “We must be intense in defence to have the opportunity to run and score at fast breaks.”

However, there will be a team competing in Cologne next week with an even stronger defence, according to Petrus: Telekom Veszprém HC.

“They are the team with more kilos, stature and power,” says Petrus, while calling the fourth contenders, PGE Vive Kielce, “the most tactical team. They have a plan and they execute it to perfection.” 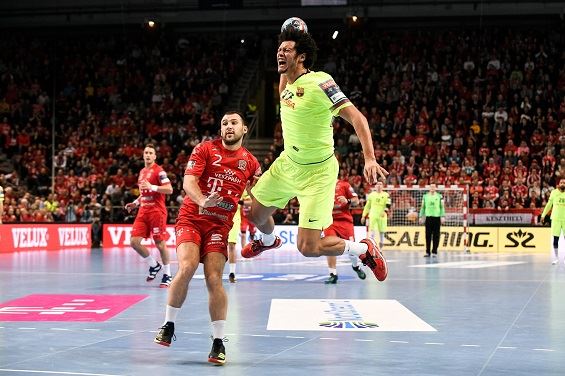 While reaching the VELUX EHF FINAL4 has been this season’s key target for Barça - after missing the event last year - Petrus hopes that the team can make the next step as well and lift the trophy.

“Being at the EHF FINAL4 was our main goal of the season, we worked a lot. For me to play in Cologne and to do it with Barça is even more special,” he says.

Petrus' family will fly over from Brazil

It will be a celebratory experience for Petrus anyway, as his family - mother, brothers and nephews - will fly over from Brazil to be at the LANXESS arena.

“I see them just twice a year, so for me it’s very special that they can be there with me. It’s very important for me that people I love are next to me,” he says.

Petrus, who turned 30 last January, is having his second stint in the Spanish ASOBAL league. He arrived from Brazil in 2012 to join Logroño La Rioja for three seasons. In 2015, he moved to Szeged before signing a contract until 2021 with Barça last summer.

“I never expected to play in Europe, but it was the reward for my work,” he says. “And also a little bit of luck to be at the correct place in the right moment.”

Petrus’ strong performances in his first season with Barça have not gone unnoticed as the Brazilian player has been nominated for ‘best defender’ in the VELUX EHF Champions League 2018/19 All-star Team.

Fans can vote for Petrus and for all other All-star Team nominees exclusively in the relaunched VELUX EHF FINAL4 app, which is available to download for iOS and for Android devices. Click here for an overview of all 50 nominated players and coaches.