Both men’s and women’s finals at the first Beach Handball European University Championships went down to the wire as Uni of Zagreb and University of Barcelona claimed the titles at Zagreb’s Lake Jarun.

University of Barcelona knew they would be up against it coming into the women’s semi-finals on the back of two losses in the preliminary round, but the shootout proved to be their friend in the decisive matches.

Barcelona came from behind to force a shootout against the locals, which went into sudden death. After missing her first attempt, top scorer Mireia Torras Parera showed her nerve to score the winning point.

Torras Parera was the hero yet again in the final against University of Novi Sad as she top scored and put away the decisive points as Barcelona again came from behind to win the shootout and the gold medal. 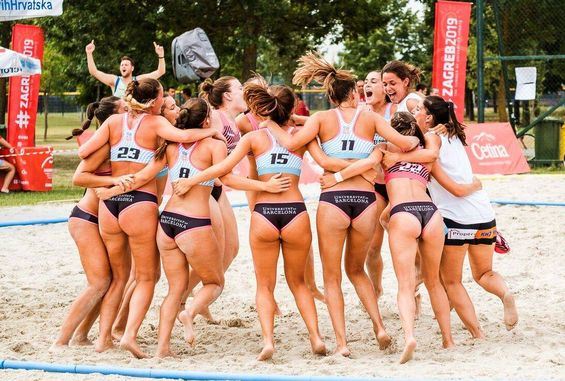 Uni of Zagreb men’s route to glory appeared relatively straightforward in comparison as they won all seven of their matches, dropping just a single set in the process – against Tilburg in the preliminary round.

Their final against University of Belgrade was far from straightforward, however, as they were pushed all the way.

In a low-scoring first set, the local side came from behind, going on a 7:2 run in the final four minutes to win 15:12. The second set was even closer and it took some nerves of steel from top scorer Mario Lacković to secure a 20:18 win and with it the title.

Next Article A legend’s farewell and a new golden generation

Poles dominate the podium in Prague