The Four Nations Cup got off to a spectacular start on Thursday as the Czech Republic and Hungary upset their more heralded rivals in the Cair Arena in Nis, one of the venues for the EHF EURO 2012 in January. The Hungarians beat hosts Serbia 32:25 in front of a capacity 4,000 crowd before the Czechs followed in their footsteps with a 33:31 victory against more heralded Croatia, hence setting alight the tournament which is essentially a dress rehearsal for the European Championship.

If the doubleheader in Cair is anything to go by, fans, players and officials can look forward to what should be a truly magnificent event early next year.

Once a ramshackle and dilapidated venue, the superbly furbished Cair Arena is now a sparkling venue ready to host the EHF EURO 2012 Preliminary Round Group B, featuring Germany, Sweden, the Czech Republic and Macedonia. 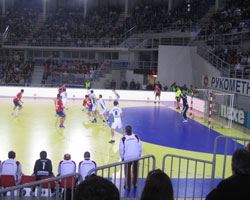 Having offered a taste of what’s coming in January after selling all the tickets for matches in Nis, the Serbian Handball Federation can now focus on adding the final touches in Cair such as completing the media facilities in the terraces as well as in the spacious newly-built press centre.

Eager to see Serbia in action, the home fans thronged the Arena an hour before the start and their die-hard section in a kop behind one of the goals generated an electrifying atmosphere with a giant drum, while they also sported banners and national flags.

Roared on by the venue’s new sound system, the home supporters kept going throughout a rip-roaring contest which the Hungarians swung their way with an 8-0 run midway through the first half.

Having trailed 9:5, Hungary romped to a 13:9 lead and never looked back as Serbia found it difficult to penetrate their aggressive 3-2-1 defence. The Serbs still had a glimmer of hope early in the second half as they only trailed 18:16 at this stage, but had no reply for Hungary’s top scorer Szabolcs Zubai who rifled in eight goals and man of the match Tamás Mocsai.

Both teams, however, praised the inspiring atmosphere on the terraces. "I want to thank everybody for a magnificent atmosphere in the Arena," said Mocsai, who scored seven goals and was also at the heart of Hungary’s incisive attacks. "We were very good in the transition from attack to defence and we conceded very few soft goals on the break, which was the key to winning this match," he said.

Hungary’s coach Lajos Mocsai added: "I think everyone can now see that we have the potential to do well in EHF EURO 2012, we adapted well to Serbia’s 6-0 defence and dictated play with several options we had in attack. We are delighted to be in the Four Nations Cup because we have excellent cooperation with the Serbian Handball Federation and we are looking forward to the European Championship."

Serbia’s coach Veselin Vukovic summed up his team’s performance in rather unusual fashion. "Unfortunately, the fans were the best part of our team and we have let them down with a below-par performance," he told a news conference after seeing Serbia suffer only their second ever defeat in the Cair Arena.

"They were much better than the players and we can only salute them for their passionate support, while we have to get used to playing in a new-look Cair in the future," he added.

In the day’s second fixture, the 2010 IHF World Player of the Year Filip Jicha masterminded a valuable win for the Czechs which will have boosted their confidence ahead of Preliminary Round Group B matches in the Cair Arena.

The match had a similar pattern as the opener, as the Czechs – roared on by those Serbian fans who stayed in the Arena after their team’s defeat to Hungary – overcame an early 4:1 deficit and came out on top in a dramatic finish.

The Croatians were twice able to catch up, first in the last 10 minutes of the first half when they kept the Czechs scoreless and netted three goals at the other end to make the half-time score 14:14.

Having trailed by three goals for most of the second half, Croatia were level at 28:28 in the latter stages thanks to a blistering performance by Domagoj Duvnjak, who scored nine goals for the EHF EURO 2010 runners-up.

But it was man of the match Jicha who had the final say with a pair of penalty shots that sealed the Czech Republic’s win and also took his personal tally to nine goals.

"We can only congratulate the Czechs for a great performance, while we let in too many goals and that’s something we need to look at," Croatia coach Slavko Goluza said.

"We didn’t play well in defence because we charged at players who had the ball too often when we should have focused on the free-flowing movement of the ball which gave the Czechs plenty of sitters in front of goal," he added.

Czech coach Martin Lipták was delighted after his team beat their more fancied opponent. "It’s always a tremendous confidence boost to beat a team of Croatia’s quality and stature, hence we will try to build on this and keep up the good work," Lipták told reporters after his team’s effervescent performance.

After a day’s rest on Friday, Serbia takes on Croatia in an eagerly awaited clash of former Yugoslavia neighbours while the Czech Republic meets Hungary in Belgrade’s Pionir Arena on Saturday.

The final day of the round-robin tournament is set for the northern town of Vrsac on Sunday, when Serbia plays the Czech Republic and Croatia takes on Hungary.

Ticketing is managed by the Serbian Organising Committees. Should you need further assistance for buying your tickets, please contact via email: tickets@rss.org.rs

Find more information on the tournament on the official website www.ehf-euro.com/SRB2012/

Join the growing community of fans of the event on Facebook www.facebook.com/SRB2012

Denmark to host all groups of Women’s EHF EURO 2020

MEDIA RELEASE: The upcoming Women’s European Championship will be played in the Danish cities of Herning and Kolding from 3 to 20 December