Danyi: “There is no end to perfectionism”

Danyi: “There is no end to perfectionism”

The back-to-back Women’s EHF Champions League winners Györi Audi ETO KC guided by Ambros Martin seemed a team to be perfect as a smile. No need for corrections.

However, Gábor Danyi thought differently. His vision was different from Martin’s when he took over in the summer of 2018. However, the results confirm his concept as the Hungarian team’s streak counts 32 unbeaten matches in Europe’s top flight going into this weekend’s DELO WOMEN’S EHF FINAL4.

More running, more fast breaks, more shots, more goals. The system can only work when a side has players like Eduarda Amorim Taleska, Nycke Groot, Anne Mette Hansen and other world-class players, including three top goalkeepers.

In Danyi’s concept the players can perform their best on both sides of the court without hesitating at all. Counter attacks are the most efficient while having a defensive wall will most likely force opponents into mistakes.

“We have an incredible basis that was left by Ambros Martin. However, I did not want to copy his style, nobody can and I am a different person. I learnt the Hungarian school and the meaning of nowadays men’s handball, such as speed and fast breaks, were my muse when we designed our game plan with the staff,” Danyi says. 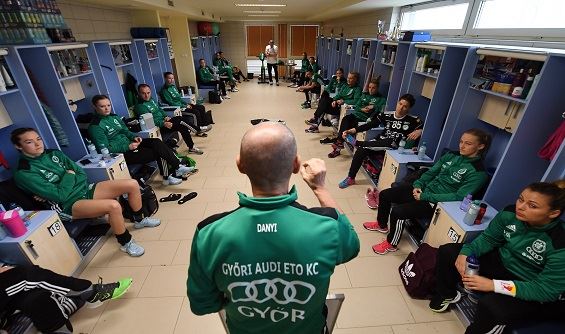 The coach says his team was “already on top of the world” so he looked for “new development opportunities for us in men’s handball.”

“The quickness of our attacks and the agility were missing when I took over,” he says. “This game is about goals and the players as well as the fans enjoy handball better with more goals. We attack 60, 65 times in a match, which means more or less the same amount in defence.”

Since the current main-round format with six teams in two groups was introduced in 2013/14, Győri Audi ETO KC have never scored as much as this season, when the title-holders found the net 210 times in the group matches before finishing on 333 goals after the main round. Under Ambros Martin, the averages were 168.75 and 280 before the knockout stage.

“With our open defence, we brought a unique system in women’s handball. However, the base came from Ambros Martin as we used his perfectly working scheme and only spiced it. With great defensive plays it is easier to run an offence. I always find little pieces that can be improved in our game,” Danyi says. “There is no end to perfectionism, but I am lucky as the whole staff, management and players share this feeling.”

Surprisingly, no Györ player is in the top five of the season’s top scorers list. This means an even more unstoppable, well-working chemistry in offence. While Rostov’s current coach’s system paid off and led to several titles, players usually like playing in offence more than in defence.

However, as the legendary American football coach Paul ‘Bear’ Bryant said, “Offence sells tickets, defence wins championships,” Györ must be careful in order to conquer Europe for the third time in a row as they conceded a record 316 goals this season up to and including the quarter-finals. 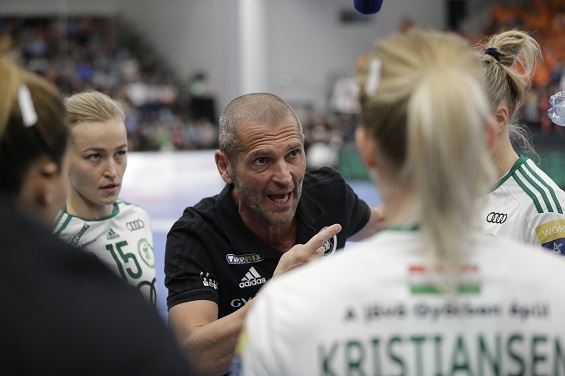 “The key of our success might be the mix between the old recipe (tough defence) and our new quick counter-attack system. We have to find the silver lining as we cannot play something totally different,” Danyi says.

“However, we cannot run throughout 60 minutes as we will play two matches in two days. Our goal is not necessarily to play spectacularly but efficiently. In the beginning the squad did not get my point about tactics and they barely understood why I substituted them after only 15 or 20 minutes. They had to understand that only fresh players are able to accomplish this strategy on the highest level,” the coach says. “As the season passed and we never lost, they accepted and followed my vision and, more importantly, they started to like what we do, just like the fans.”

"I am especially happy when we function as a team"

Gábor Danyi could meet his ex-colleague Ambros Martin in Budapest this weekend. Györ will have to get past Vipers Kristiansand in the first semi-final on Saturday (live on efTV.com from 15:15 hrs) while Rostov-Don face Metz handball in the other semi-final.

“It is going to be strange that I will sit at the bench as the head coach at the EHF FINAL4. There are great people around me who help me in everything. I would be excited to play against Rostov as Ambros Martin leads them now,” Danyi says.

There is no other person who knows the defending champions better than the Spanish mastermind and his system with the right players could be able to stop the Hungarian locomotive.

“I am especially happy when we function as a team. Our side seems to be unbeatable when every player scores around four, five or six goals. This shows the real power of our chemistry,” Danyi says. “There is always somebody to step up in the harder times and even if it is close at the end of a match, we have Amorim, Groot, Hansen, Oftedal, Görbicz and many others who can finish the job.”

Next Article Young Coaches Workshop goes to Siófok in June

“Finally some handball” - Players react to the group phase d…