The Men’s World Championship 2019 will get a first-time winner: either Denmark or Norway.

The two Scandinavian nations will contest Sunday’s final in the Jyske Bank Boxen in Herning after they both won intense semi-final battles on Friday night (results).

Led by 12 goals from Mikkel Hansen, co-hosts Denmark beat defending champions France 38:30 for their ninth straight win in the tournament.

A few hours later Norway ended the title dreams of the other host nation, Germany, claiming a 31:25 victory in the second semi-final at the Barclaycard Arena in Hamburg.

Denmark and Norway also played each other in the last match of the preliminary round, with Denmark winning 30:26.

Denmark, the current Olympic champions, won the EHF EURO in 2008 and 2012. For Norway, winning gold Sunday would be their first major title. 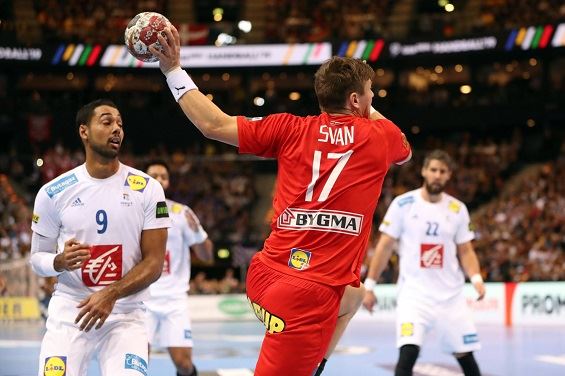 France didn’t worry too much about having their 24-match unbeaten streak snapped by Croatia in a rather meaningless last match of the main round.

But the second defeat against Denmark hurt them, keeping them out of a third straight World Championship Final.

Hansen opened the scoring after two minutes, and Denmark remained ahead of France for the entire match. Within seven minutes, the lead for coach Nikolaj Jakobsen’s team was already three goals, and grew to six when Hansen netted again for 21:15 on the half-time buzzer.

There was no way back for France after the break, and when Rasmus Lauge stretched the difference to 10 (30:20) in the 44th minute, Denmark knew for sure they would be in Sundays’ final in front of their home crowd.

Hansen with 12 and Lauge with six led for Denmark, while Kentin Mahe netted eight times for France. 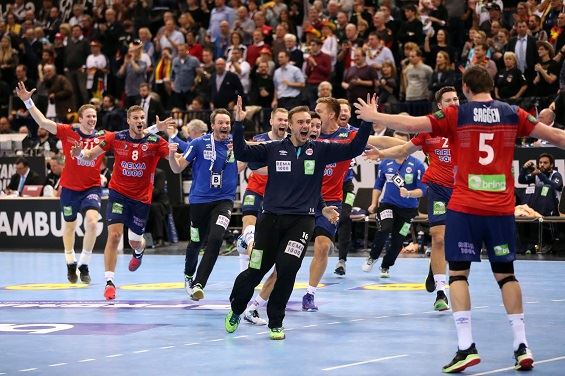 Germany’s declared target for their home World Championship was reaching the semi-finals. Once they had accomplished that, the team from coach Christian Prokop wanted more.

However, Norway proved a stumbling block for the host nation. While Germany showed the will to win, they had to accept that they came up short in individual quality against Norway.

Germany pleased the home crowd in Hamburg with a quick two-goal lead (3:1), and though Norway leveled the score just as quickly, the hosts went in front again when Uwe Gensheimer converted a penalty for 6:5 after 14 minutes.

But from then on, Norway took control, directed by an outstanding Sander Sagosen. They earned their first two-goal lead thanks to Magnus Gullerud in the 20th minute (9:7), and reached half-time with the same margin (16:14) following a last-second penalty by Magnus Jondal.

Fabian Wiede reduced Germany’s deficit to one goal shortly after the break, but Norway soon ran away again. Five minutes later the difference was four (19:15) for coach Christian Berge’s side, and that lead came not under real threat anymore.

Magnus Rod scored seven goals and Sagosen and Bjarte Myrhol both had six for Norway. Gensheimer with seven and Fabian Bohm with six led for Germany.