Two easy wins, two extra-time thrillers - one of them with two red cards and a penalty shootout: There was no shortage of drama in the quarter-final of the Men’s IHF World Championship 2021 in Egypt on Wednesday.

In the end, an all-European quartet has remained in the race for the medals. In a line-up with the same four semi-finalists from the EHF EURO 2018, Denmark will face Sweden and France are set to take on Spain for a place in Sunday’s final.

EHF EURO top scorer Sander Sagosen sat disappointed on the bench, while the Spaniards had another fiesta: Norway were left without a chance against the highly focused EHF EURO champions. Spain’s key player was goalkeeper Rodrigo Corrales, who saved 19 shots for an outstanding rate of 42 percent.

Norway tried everything, but the Spanish defence was simply outstanding, allowing Sagosen just four goals - all in the first half. Spain turned turnovers in counter-attack goals and were sharp as a knife in their position attacks, with Alex Dujshebaev (eight goals) as top scorer.

The gold dream for 2017 and 2019 finalists Norway is over, while Spain are going for their second gold after lifting the trophy in 2013 on home ground.

Leading by one goal (8:7) after 21 minutes, Qatar kept their semi-final dream alive for one-third of the match. However, Sweden struck back and turned their deficit into a 14:10 half-time lead. It set the tone for the rest of the match, which was decided with Sweden leading 25:13 in minute 41.

Qatar did not have the means in attack, as Sweden stopped World Championship top scorer Frankis Marzo, who only netted five times. The Swedish defence was brilliant, and their top talents Valter Chrintz and Lucas Pellas shone again with eight goals each. The record EHF EURO champions will appear in their first World Championship semi-final since 2011 and can win their first medal since taking silver in 2001.

What a rollercoaster ride in a high-class match between the record world champions and Europe’s surprise pack: France advanced to their 13th World Championship semi-final only after extra time. The bravely fighting Hungarian side excelled with goalkeeper Roland Mikler (16 saves) and line player Bence Banhidi (six goals from six attempts). 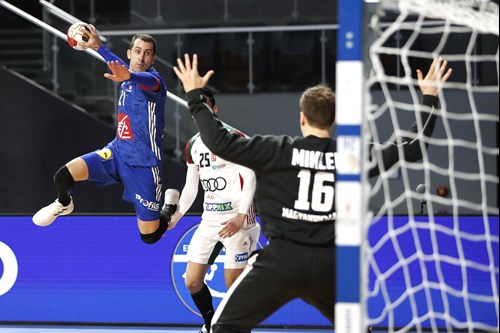 A blistering start earned Hungary leads of 7:1 and 9:3, but France woke up and saw experienced left wing Michael Guigou scoring all his six goals before the break to keep France in the match. France’s first lead came only in minute 40 (20:19) and they seemed to have done enough building a 30:27 lead with three minutes left. But Hungary bounced back and Banhidi netted for 30:30 to send the match into extra time. Two strikes from Nicolas Tournat and Luc Abalo gave the semi-final ticket to France in the end.

Hungary finished the tournament in fifth position - their best ranking since placing fourth in 1997.

Mikkel Hansen was close to become the tragic figure of a historic handball thriller but cheered for joy when teammate Lasse Svan ultimately converted the decisive penalty for Denmark in an incredible quarter-final against hosts Egypt, who cried tears of sadness.

First, Hansen’s wrong pass in the closing seconds robbed Denmark of a last chance when the teams were locked at 28:28 after 60 minutes. Later, the PSG star received a red card for irregularly blocking Egypt’s last attack in the first extra time, which enabled the hosts to chance to level at 34:34 by converting the subsequent penalty.

But the fortunes for Denmark turned, as they got a last-second penalty from a similar situation at the end of the second extra time. Magnus Landin converted for 35:35 before his older brother between the posts, Niklas, saved the Danes from elimination in the penalty shootout. Hansen led for Denmark with 10 goals, Yahia Omar scored 11 times for Egypt.

Calendar
Home of Handball
Media Releases Global audience of handball soars at EHF FINAL4
EHF Champions League The season is over, what is next?
EHF EURO Cyprus and hosts Georgia advance to semi-finals
Quick Links