The four teams that have advanced from the group phase of the European qualification for the Men’s World Championship 2021 learned on Thursday which opponents await them next on the road to Egypt.

The draw for the first play-off phase took place at the EHF office in Vienna and paired the quartet with the four lowest-ranked teams from the Men’s EHF EURO 2020.

Turkey, who already qualified from their group in October, have been handed a tie with Russia, who ranked 22nd at the European Championship which ended last Sunday.

After easing through their qualification group, Romania will now meet Bosnia Herzegovina, who finished fourth in their tough EHF EURO group with Norway, Portugal and France.

Poland, the 21st-ranked team from the EHF EURO, will start the two-leg play-off at home against Lithuania, who edged Slovakia by one goal to advance from their qualification group earlier this month.

Also, after snatching the win in their qualification group by beating rivals Greece in the last match a few weeks ago, Israel can prepare for two duels with Latvia, who shared a group with eventual champions Spain at the EHF EURO. 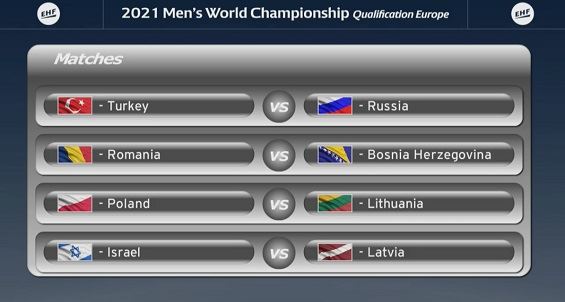 The four winners advance to the second play-off phase in June, which will also include all other teams from the EHF EURO 2020 which are not qualified directly for the World Championship 2021.

The 14-31 January finals tournament in Egypt will be played with 32 participants for the first time. Europe has 13 spots, which does not include already-qualified Denmark as the defending champions.

More information on the qualification procedure for the World Championship can be found here.