Four talking points (and more) from round 13

Four talking points (and more) from round 13

Goals are flying in left and right in the VELUX EHF Champions League at an unprecedented rate, while the top two places in groups A and B have now been secured.

After THW Kiel were already assured of the top spot in group B, Barça achieved the feat in group A this weekend, so those two teams will skip the Last 16.

Yet, many other teams have still everything to play for as they want to improve their ranking ahead of the Last 16 as the group phase reaches its conclusion next week.

A new record for Barça

With one round left, we have the two group winners. After a 37:25 win against Celje, Barça joined Kiel as the second team through to the quarter-final, as they tied their record of 12 consecutive wins in the VELUX EHF Champions League.

The Spanish side have an otherworldly goal difference of +103 goals, as they hold the best attack in the competition with 455 goals scored, an average of 35 per game, and the third-best defence with 352 goals conceded, only 12 more than MOL-Pick Szeged.

Barça need 32 goals in the last game against Szeged to become the team with the best attack in the current format of the competition at the end of the group phase, improving their own record of 486 from last season, when they also won the group but ultimately failed to secure the trophy.

Are the play-off ties decided yet?

The four teams that earned a play-off berth from groups C and D were finally back in action in the VELUX EHF Champions League after 12 weeks, vying for a place in the Last 16. At the halfway point, two teams look like clear favourites.

Dinamo Bucuresti remained the only unbeaten side in the competition after 11 games as they edged Sporting C.P. for a close 26:25 win. That might seem tight but Dinamo have won all five games on home court this season and their 2,500-seater Dinamo arena was sold out in 20 minutes for the return leg.

Approaching their first ever Last 16 berth, the Romanian side, however, will remember last season’s play-off which they lost against the same opponents after a blackout in the second half of their home tie.

Meanwhile, Orlen Wisla Plock disposed of Bidasoa Irun, 32:25, and are heading into the second leg with a healthy seven-goal advantage.

It was one-way traffic in the first leg, but the Polish side need to remain alert. Last season, they came back from a four-goal home defeat to snatch a Last 16 spot with a big away win at Bjerringbro-Silkeborg.

Who will complete the knockout line-up?

There is only one spot in the knockout phase remaining from the 12 available for teams from groups A and B.

In group B, all six teams that advance are known. With their win against Vardar on Saturday, Porto earned the last berth. Group winners THW Kiel, Telekom Veszprém HC, PGE Vive Kielce, Montpellier HB and the title holders, Vardar, are also through.

Kiel have won the group, Veszprém secured the second place with the Match of the Week win against Montpellier, as Kielce (16 points) and Montpellier (15 points) will fight for the third place. Porto (12 points) and Vardar (11 points) are still in a battle for the fifth place.

In group A, the winners are Barça, while Paris Saint-Germain HB and MOL-Pick Szeged (both on 20 points) are yet to confirm their places in the group. SG Flensburg-Handewitt and Aalborg Handball are also tied, on 13 points, in the fight for fourth place.

And there is still one berth left as it will be an all-or-nothing week for RK Celje Pivovarna Lasko and HC PPD Zagreb, the teams left in the race for the last knockout phase ticket.

Celje (six points) are holding a one-point advantage over Zagreb and can seal the deal when they do not lose at Flensburg on Wednesday.

Only if Celje lose the midweek match in Germany, Zagreb will have a chance on Sunday to grab the knockout ticket but would need an upset victory over PSG in Paris.

If the two teams finish level on points, Celje are through as they hold the ‘tiebreaker’ after winning both matches against Zagreb this group phase, 24:22 at home and 31:27 away.

9,889 goals have been scored in the first 166 games of the season, as teams are scoring at a record pace in the VELUX EHF Champions League.

While the average number of goals has floated between 55.56 goals per game in the 2015/16 season, when the current format has been introduced, to 56.98 last season, it has skyrocketed in the current season.

The 28 teams that took part in the European top competition this season combined for 59.57 goals per game, a rise of nearly three goals per game from last season.

The reasons for this uptick may be countless, but more teams are taking risks in attack by pulling out the goalkeeper to have an extra outfield player in attack, while others have embraced the fast-paced style that Barça or PSG imposed in the last seasons.

We are used to seeing line player Artsem Karalek fighting for position and trying to deter his opponents in defence, but all those balloons and party hats look superb near him. Don’t you think so?

Have you ever asked yourself how a court is changed for a VELUX EHF Champions League game? Well, Veszprém recorded it all, made a superb time lapse and posted it on their social media accounts. Are you curious? Press play!

Have you ever had your hair cut during a handball game? Well, just travel to Paris and it is possible!

“Some of my players are the future of handball. I hope that, someday, they will be able to play for big clubs like Paris.”

Elverum came up short against PSG in Paris on Saturday (31:25) but the coach of the Norwegian side put the result in perspective. Some young and talented members of his squad will further develop and, maybe, one day could play for one of the leading teams in the EHF Champions Leaggue, like Saturday's opponents. 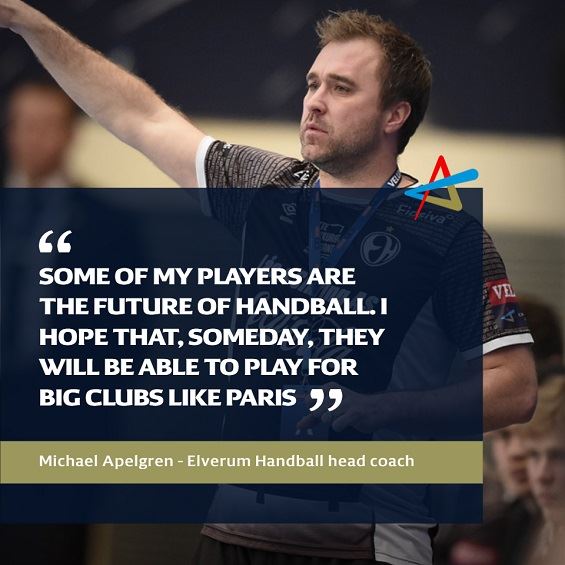