France hold all three titles in their hands again

France hold all three titles in their hands again

The French national team proved once again their outstanding skills, experience and will as the "Experts" beat the 2015 World Championship hosts Qatar in the final on Sunday in Doha. France are the first team in history to become world champions for the fifth time, for the second time holding all major titles (Olympic, EURO and world championships) at the same time in their hands.

“I’m very proud of this victory. It was a very difficult game. We demonstrated an exceptional performance and this victory is very important to us,” said French coach Claude Onesta after his eighth gold medal in eight years.

“You cannot classify those titles. Every title was a different story, a different adventure. When we won the EHF EURO 2014 with a very young team, it was our dream to confirm this gold medal here in Qatar. But we could not be sure if we would manage it,” Onesta added.

In addition to gold medals and the trophy, France booked the ticket for the 2016 Olympic Games in Rio de Janeiro. Five more European teams - Poland, Spain, Denmark, Croatia and Germany - as well as silver medalists Qatar have clinched their berth for the three Olympic Qualification Tournaments in April 2016.

But Qatar - first non-European finalist at a men’s world championship history - was a high hurdle to cross, fought until the end and was celebrated by thousands of fans in the Lusail Multipurpose Hall during the thrilling match.

Qatar have (in addition to the upcoming host) qualified for the 25th world championship 2017 in France. Before, Poland had won the bronze medal after a thrilling extra-time win against dethroned 2013 world champions Spain. 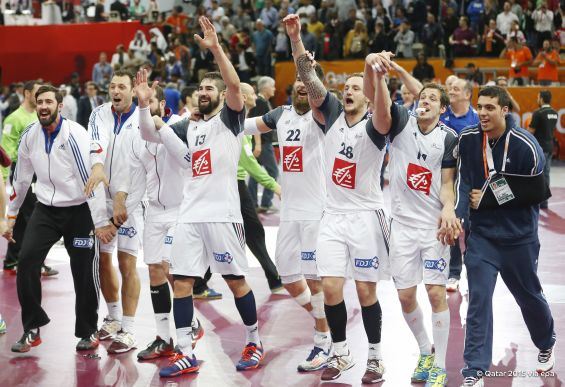 Twenty-five seconds before the final buzzer the French players already jumped on the court and on the bench, knowing that they made it again. When Daniel Narcisse netted in for the final score 70 seconds before the end, the deal was sealed and the strong Qatar resistance was finally broken.

Boosted by Narcisse and top scorer and All Star Team member Nikola Karabatic (five goals in total), France started in a brilliant way, forging ahead to a 13:7 lead after only 23 minutes.

But the host did not surrender, showed character - and coach Valero Rivera found the right means to re-adapt the attack match play of the team. In minute 45 the host was close to turn the match around, when Borja Vidal netted in for the 20:21 - but Qatar did not manage to equalise. In contrast, the gap remained at least two goals until the final buzzer.

Qatar’s Danijel Saric won the goalkeeper duel against Thierry Omeyer (awarded best goalkeeper and Most Valuable Player of the world championship) clearly by 14:9 saves, but his team mates lost too much power in the previous games to get through the concrete-solid French defence.

When the final shot of Antonio Garcia was blocked by the defence after 70 minutes, the third Polish World Championship bronze medal after 1982 and 2009 was secured. After a highly thrilling and tight match the extra time needed to bring on the decision though Spain were ahead by 22:18 and just nine minutes on the clock.

A double strike of Polish top scorer Michal Szyba (eight goals) including the final one with the final buzzer sent the game to extra-time, in which the dethroned champions Spain did not lead for a single time.

Right wing Victor Tomas was best Spanish scorer with seven goals - but his strikes and goalkeeper's Gonzalo Perez de Vargas 15 saves were not enough to award Spain a third consecutive world championship medal after bronze in 2011 and gold in 2013.

On Saturday, Germany had taken the last spot for the Olympic qualification tournament by a 30:27 win in the 7/8 placement match against Slovenia. Denmark won the 5/6 placement match by 28:24 against Croatia.