On the 29 October 1917, the first rules of the game of handball were published in Germany, and on 2 December 1917 the first ever official handball match took place in Berlin.

Now 100 years later, German handball has celebrated its anniversary in Berlin. Foreseen initially as an alternative to football, handball started its global journey in Germany.

The weekend 28/29 October was not just about celebrations. The federation also held its ‘Bundestag’, voting for major changes to its structure.

The new developments will see the board of the federation with ten persons, including the re-elected President, Andreas Michelmann, acting as a supervisory board of the new professionalised executive board, headed up by General Secretary, Mark Schober.

Currently 750,000 people in Germany are registered in 4400 handball clubs – but it is the clear aim and mission of the German federation to increase these numbers.

A large number of honorary guests were part of the two-day event in Berlin, including EHF President Michael Wiederer and IHF President Dr Hassan Moustafa.

Both praised the significance of Germany as a globally driving force in handball.

“100 years of handball in Germany is also an international milestone in our sport,” Wiederer said in his speech.

Parallel to the anniversary event, the EHF finance delegation held its meeting in Berlin.

During the congress, the German Federation announced its focus on bidding for the Men’s EHF EIRO 2024 as a single host and its intention to withdraw from the co-hosting bid with Switzerland and Denmark for the 2022 event.

Germany was the host of the first Women’s EHF EURO in 1994, which was a “great start for the EHF EURO events,” according to Michael Wiederer, before adding: “We expect a strong bid for the 2024 event.” 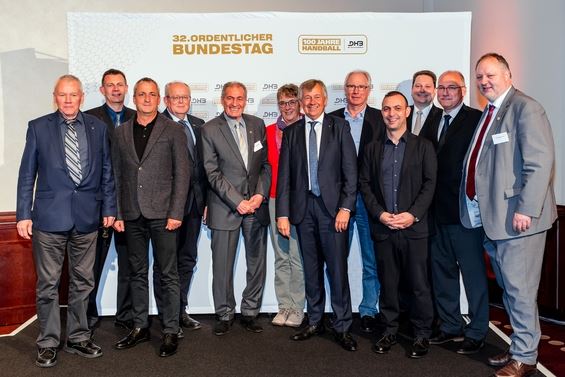 Besides the congress, a ‘100 years of handball brunch’ took place in the Humboldt-Box in Berlin, focusing on former and current German handball heroes, such as the 1978 and 2007 men’s world champions, the 1993 women’s world champions, the men’s 2004 and 2016 EHF EURO champions and – as the youngest gold medallists – the U17 girls team, which took the EHF EURO gold this summer.

A reception hosted by the Berlin city government was also attended by the current men’s national teams.

Of course, handball was also played as part of the celebrations: the ‘Bad Boys’ duelled twice with Spain in the re-match of the 2016 Men’s EHF EURO, losing the first encounter in Magdeburg 24:26 and winning at Berlin 28:24.

In a double header with the men, the German women’s side beat Netherlands twice in their preparation for the World Championship on home ground in December.

Both arenas were sold-out with an overall total of 15,500 fans. “Only Germany can organise events like this,” the Spanish men’s national team coach, Jordi Ribeira said.

Looking to the future, the DHB President, Michelmann underlined the international role German handball want to play – on and off the court.

“Our national and club teams shall remain top brands and ambassadors on the European and global stage, and the representatives of our federation are eager to support EHF and IHF wherever we can,” he concluded.

The Germany broadcaster, ARD, which will broadcast the Men’s EHF EURO 2018 in January 2018, produced a special hour-long film to mark the 100-year anniversary of the sport.

The film can be watched via the ARD Mediathek (if available in your country).

Next Article Bietigheim in new role as favourites

Barça and Vipers among 2020/21 national champions

NEWS: As the 2020/21 season comes to an end, EHF President Michael Wiederer looks back at a challenging but eventually successful cycle for…

NEWS: The EHF is official partner of the Wroclaw Handball Cup, which brings together 120 teams from 10 nations in August