They say you make your own luck, yet nobody at CSM Bucuresti would have chosen this streak of bad luck if given the choice.

Luck plays a huge part in a team’s success in any given season, be it an injury-free campaign, a goal in the last second, an acrobatic save from a goalkeeper or a miss by the opponent in crunch time.

But at CSM this feels like more than bad luck. The Romanian side has already progressed to Budapest three times now, each season from third or fourth position in the main round, despite their star-studded rosters.

Right now, CSM’s fate is out of their hands. Should they finish second, they will meet Buducnost in the quarter-finals, with the second leg at home. But for that, they need to win against Thüringer HC, then Györ to win at Kristianstad and FTC to overcome Krim.

Sure, their management woes have been there on display in the past few years, with vast overhauls of the roster, which turned the Romanian side into a Brazilian-centred team, then a Scandinavian-focused side, to this season’s Balkan party, which features seven players from former Yugoslavian nations as well as Serbian coach Dragan Djukic.

The talk about the coaching changes is redundant, with the Romanian side failing to finish one season with the same coach. There have been nine coaches in the past five years at CSM, hardly a staple of consistency and the long-serving players themselves admit that it can get a little frustrating at times.

A mistake from the beginning

This season felt like a drag before it even started. It was a hectic search to find the head coach to replace Per Johansson and fellow Swede Magnus Johansson was named just ten days before the start of the season.

A loss against SCM Ramnicu Valcea on home court in the Romanian super cup was a wake-up call for everybody involved, yet CSM failed to perform both in the domestic league, where another home loss against Valcea followed and in the Women’s EHF Champions League.

Johansson was let go in October as his Scandinavian methods did not feel at home in a team with such heavy Balkan influence.

In came Dragan Djukic, a Serbian journeyman, who could not change much, as CSM lost against Vipers Kristiansand, 31:26, in a home game which could cost the Romanian side later in the season.

“It is a tough season for us, it is clear that the feelings are not the best inside the team right now and we fight for every point. It is hard and it will be harder than ever this season,” said Cristina Neagu, the team’s star, after the 34:28 win against FTC in November.

“We have not played as a team for long patches this season, but we learnt from our struggles. We talked a lot and we hope to be better, there will be some changes,” said line player Oana Manea before the start of the main round. 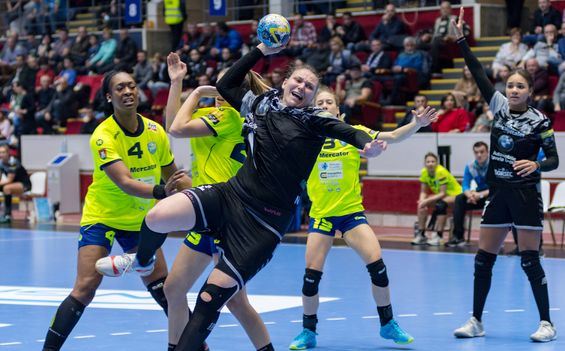 Who can plan injuries?

In a vacuum, CSM looked like a bonafide title contender, with an astonishingly talented back line in Cristina Neagu, Andrea Lekic and Amanda Kurtovic.

But then, disaster struck. In a friendly game before the EHF EURO 2018, Amanda Kurtovic suffered a devastating knee injury and her season ended.

Two weeks later, Neagu suffered the same ACL injury in the last game of the main round at EHF EURO 2018 and was out for the season.

“I have not seen such a season, with so many injuries. It is unfortunate, but now we must make do with what we have and also play for those who are out. They support us,” said captain Iulia Curea, the left wing whose experience is second to none in the CSM roster, boasting ten seasons for Oltchim Ramnicu Valcea and CSM in Europe’s top flight.

You simply cannot plan for such events even if you are one of the top teams in the Women’s EHF Champions League.

CSM’s management scrambled to find replacements on the European market, but ultimately failed and had to bring in a Romanian left back from HC Zalau, Claudia Constantinescu, who herself was troubled by injuries in the past two seasons and had zero experience in the Women’s EHF Champions League.

Yet the story is not over.

Influential left wing Majda Mehmedovic has appendicitis and will miss several weeks, Andrea Lekic only trained a dozen times in February and is not even at 50 per cent due to back pain, while Sabina Jacobsen is also injured.

In the 23:22 loss against Krim last week, CSM could only rely on four back players – Constantinescu, 21-year old Bianca Bazaliu, Barbara Lazovic and playmaker Elisabeth Omoregie, while Iulia Curea had to play 60 minutes as the only left wing in CSM’s roster.

It did not help that Constantinescu was red-carded after only 20 minutes and CSM’s back line practically imploded, forcing Djukic to make out of the box combinations to keep the team going.

Everybody thinking about next season

The loss against Krim could have meant nothing, but Vipers Kristiansand are two points ahead in the standings and also hold the tiebreaker against CSM. This means the Romanian side could face a crunch battle with Rostov-Don for a berth in the DELO WOMEN’S EHF FINAL4.

Whether it be Buducnost or Rostov-Don, the two likely opponents the Romanian side can face in the next round, they will face their toughest quarter-final to date.

Yet nobody can shake the feeling that the current CSM situation is a paradox: after the flurry of changes that baffled the team and the fans, a disappointment was long due. But if Neagu and Kurtovic were fit to play, CSM would have been favourites against any opponent.

There is also a quirk in everything happening at CSM: the team announced eight new signings, but the negotiations to extend Cristina Neagu’s contract are still ongoing.

“Many players, including myself, came to CSM for Cristina Neagu, not for Bucharest or its attractions. We need her to stay, she deserves everything, because she is the best in the world,” said line player Dragana Cvijic.

Next Article Emma Friis is “simply good at keeping cool”