It saw daylight on 28 May 2010, place of revelation was the German Sports and Olympic Museum in Cologne, on the shores of the river Rhine, from where you can see the LANXESS arena.

The new trophy of the EHF Champions League Men had been crafted earlier, but on this day in May 2010, it got its final touch from two Austrian metal artists, Herbert and Stefan Gahr, during the Opening Ceremony on the eve of the first ever VELUX EHF FINAL4 in Cologne.

Simply different from all trophies in other major sports

When the curtain was raised and the trophy revealed, reactions were varying. This trophy was simply different from all trophies in other major sports: A unique metallic arm, a mesh of stainless steel and brass, forged in fire by the Austrian sculptors, who bond the ball to the arm for the first time that night.

The idea behind the trophy: to reinvent the ultimate prize and think beyond the ordinary cup.

Artist Stefan Gahr on how the process shaped up in his mind: “I looked through hundreds of snapshots of top handball games and the mighty throwing arm had caught my eye. Symbolising the throwing arm of a player, the moment between victory and defeat, is encapsulated in this sculpture.”

Then EHF President Tor Lian, Mayor of Cologne Jürgen Roters, and the team captains of the four participants in the inaugural EHF FINAL4 were truly impressed.

“All players want to get this trophy on Sunday, but only one team will receive it,” said THW Kiel’s Marcus Ahlm.

"How shall we drink champagne out of it?!"

His teammate Dominik Klein, however, noticed a disadvantage with the new trophy. Jokingly: “How on earth shall we drink champagne out of it? This is impossible!”

Two days later, Ahlm and Klein did lay their hands on this magnificent trophy. And already some hours after celebrating on the winners’ podium, Klein backtracked from his earlier doubts: “We will not tell you how, but we managed to drink our champagne from, by and through this metal arm.” 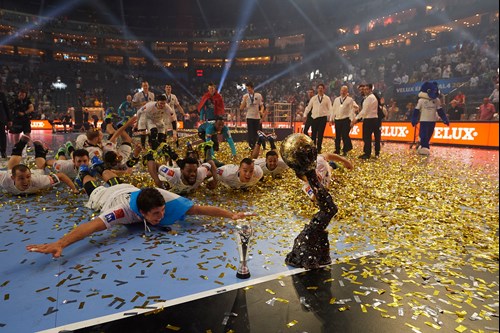 From that moment this trophy was in the hearts of all players and fans. The tens of thousands of fans flocking to Cologne each year, were offered the opportunity to take pictures with the most coveted arm in European handball.

It became a real tradition that each year the trophy, newly created, was presented to the fans during the opening party on the night before the semi-final.

While the previous cup was damaged during Kiel’s winners party in 2007, this massive trophy turned out to be unbreakable, no matter the intensity of the celebrations.

For some players, the metal arm trophy sparks special memories.

Kiel’s goalkeeper Thierry Omeyer has kissed the trophy twice, in 2010 and 2012: “It is really heavy, but actually you don’t care about its weight when you raise it. And every time I entered the THW office and saw the two trophies, I remember those exciting matches in Cologne.”

On 29 December 2020, 10 years and six months after it was raised for the first time, the metal arm waves goodbye.

A new trophy – this time an identical design for the men’s and women’s editions of the EHF Champions League – will be handed over by EHF President Michael Wiederer in May and June 2021.

The new trophy is partly made from recycled materials

The newly designed, iconic trophy has been partly made from recycled materials, including handballs. Created by Spanish agency Sustain Awards by Oiko Design Office in Barcelona. The new trophy shows the moment the ball hits the net.

Before this new piece art will be awarded in 2021, the final question is which team will raise the metal arm for the last time?

In the end, even Dominik Klein, who ended his international career at the EHF FINAL4 2018 after seven appearances at the event with Kiel and Nantes, fell in love with it: “I love this trophy. Every time I see it, I can feel its character. The trophy honestly became my friend.”

Previous Article Kristopans: “Impossible to take it for granted”

Next Article Contenders for the crown - breaking down the four teams