Europe was the dominating continent at the XVII Women’s Juniors World Championship 2010 in Korea, winning all three medals and possessing 12 of the 13 best ranks.

For the first time ever adult women’s European and Olympics Champions Norway has won the Junior’s title. "I’m so proud, we have written history today," Coach Tom Morten Svendsen said after his team had beaten Juniors Record World Champion Russia with a clear 9 goal difference in the final. 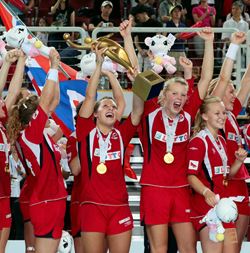 Norway had beaten Russia with their own weapons in a one-sided game – a strong and active defence, fast counter attacks and a high efficiency in attacks. Best Norwegian player of the Final Round was Nora Moerk from EHF Champions League participant Larvik HK.

After the score of 9:8 Norway scored five consecutive goals and thus paved the way to Gold, as the Russians ran out of ideas to break through the Norwegian defensive wall. At some point the Russians were even eleven goals behind. "We knew that we were able to win, but we never expected to beat Russia with a nine goal difference," Svendsen added.

Norway only lost one of their ten WCH matches – a Main Round game against host South Korea. And the host cried bitter tears in the end – and felt ashamed for their final ranking. After losing the semi against Russia 26:30 the dream of their first ever WCH title in this age category was over – and then they totally surprisingly lost the Bronze final against Montenegro.

"This is the biggest success in handball for our country," Coach Dragan Adzic said, after his team had beaten the host in a high tensioned game 24:23. Match winner was Milena Knezevic, who scored the last four goals for Montenegro and individually turned the game in the final stage.

Nobody had expected the Balkan team to be so strong after their batteries were complete on zero after the semi-final defeat (16:26) against Norway. Russia played their best WCH match against Korea with their tall defence players and outstanding top scorer Tatiana Khmyrova, who scored ten goals.

Montenegro were the only team to beat Russia before the final – and after missing the title the Russian coach Alexej Gumyanov took the blame for the defeat: "I feel guilty, as I couldn’t motivate the players."

Interesting fact: Both finalists had missed the last Junior’s WCH in Macedonia 2008 as they had failed the European qualification. In 2009 Norway became European Champions, Russia ranked third.

At least 30-35 of the WCH participants will meet again at the Women’s EHF EURO 2010 in Denmark and Norway in December – and the Montenegrinian coach Adzic spoke for most of the European teams: "Those players are the base for the future, for the next EHF EURO, the next World Championships and the Olympic Games in London."