The qualification for the Women's EHF Champions League starts on Wednesday – 17 teams from 15 countries fight for five spots.

Eleven participants had directly qualified for the Group Matches as champions of their countries. From Wednesday to Sunday the final five spots for the next stage in this competition will be decided in three qualification tournaments, one Wild Card Tournament and one play-off encounter. 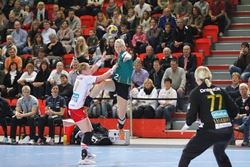 17 teams from 15 countries are aiming for those spots, which will be decided in six different cities all over Europe: Viborg (DEN), Cluj Napoca (ROU), Trondheim (NOR), Issy (FRA), Michalovce (SVK) and Dabas (HUN). And only the winners of those tournaments/play-offs will make their way to the Group Matches, which will start 16 October and will be played in six rounds until 18 November.

Those 12 teams who fail to qualify for the Women's EHF Champions League will start in the EHF Cup Winners’ Cup – those which rank fourth in the three qualification tournaments are seeded in Round 2, the remaining teams in Round 3.

Despite severe injury problems host Viborg is the favourite to march on to the Group Matches. The Danes need to replace their left handed players Amanda Kurtovic and Grit Jurack (end of career) but hope for a short-term reinforcement of their squad.

International experienced team from Bera Bera will have a tougher task to fulfil to reach the final than the host, as the Polish side improved in the previous years and strengthened their squad by some newcomers from Poland and Spain despite the fact that coach Thomas Orneborg and seven players left the team, now coached by Andrzej Nierzawa. Bera Bera is the only Spanish team in this season’s WOMEN´S EHF Champions League, as national champions Itxako has withdrawn from their participation.

The winner will join Group D in the Group Matches, playing defending champions, Buducnost (MNE) and Thüringer HC (GER) as well as the winner of theWild Card tournament.

Three Olympic champions – Camilla Herrem, Ida Alstad and Tonje Nostvold – hope for the qualification to the Group Matches with their team from Trondheim. After failing three times in the qualification stage in the past five years, the Norwegian runners-up hope to continue as they did last season, when they won their qualification tournament.

The second semi-final is a neighbour’s duel Germany vs. Netherlands. After surprisingly making their way to the Group Matches last season, Buxtehuder SV hope to relive those emotions. Dalfsen is the underdog in this encounter. But the Germans miss their team captain Isabel Klein after a rupture of the crucial ligament.

Three powerhouses of European women’s handball fight for one spot: Like no other qualification tournament the one in Romania is full of international stars and experience. And in contrast to the tournaments 1 and 2 the host is not the big favourite. Never before Cluj made it to the Group Matches of the Women's EHF Champions League. But in their semi-final against the Turkish champions Cluj is supposed to be the favourite.

The other semi is something like the final already: Both teams – Rostov and Zaječar – made major reinforcement of their squads. The Russian runners-up signed two current Champions League winners in Ana Djokić and Sonja Barjaktarović from defending champions Budućnost. The Serbian champions on the other hand improved their squad with several Spanish internationals like Olympic bronze medallist Jessica Alonso. The winner of this semi-final will be the favourite in the final.

In contrast to the schedule of the tournaments 1 – 3 the Wild Card Tournament will be played in the round robin system. For host Issy the dream of the first ever participation in the Women's EHF Champions League can come true, after French champions Brest did not get a license for the French league and withdrew from the elite league.

But the competition for the host is tough: Zvezda (third ranked in Russia) have the biggest international experience and several Russian national team players in their squad, Leipzig (third ranked) were semi-finalist of last season’s EHF Cup Winners’ Cup. And if the German proceed to the Group Matches, they will have two extremely emotional duels with their East German arch rival Thüringer HC.

The winner will join Group D in the Group Matches, playing defending champions Budućnost (MNE) and Thüringer HC (GER) as well as the winner of the Qualification Tournament 1.

With reinforcement from Russia (Natalia Vinyukova) and Ukraine (Julia Snopova) the Slovak champions from Michalovce hope for the Group Matches after missing the upcoming stage in the previous seasons and never had been part of the top 16 teams in Europe.

But the Hungarians – defending champions in the EHF Cup Winners’ Cup 2011 and 2012 – are in the favoured role against their neighbours. In the 2007/2008 season they had been part of the Women's Champions League Group Matches for the last time. Except two foreign players from Belarus and Spain, FTC do only count on Hungarians, mostly part of the national team.

Join the growing community of handball fans of Facebook!
www.facebook.com/ehf.champions.league