Romania, Serbia, Slovenia and Sweden made no mistakes in the second leg of the play-offs Wednesday as they booked their tickets to the Women’s IHF World Championship 2021 in Spain.

All four teams started their decisive matches with a big lead from the first leg. But despite a 14-goal advantage from last week, Sweden still had to overcome a scare against Ukraine.

On the eve of their home match in Lund, several Swedish team players tested positive for Covid-19, prompting the federation to completely change the squad compared to last week: 14 replacements were hastily called up, including seven debutants.

Also, IF Hallby HK’s Jesper Östlund took over from head coach Tomas Axnér for this match. 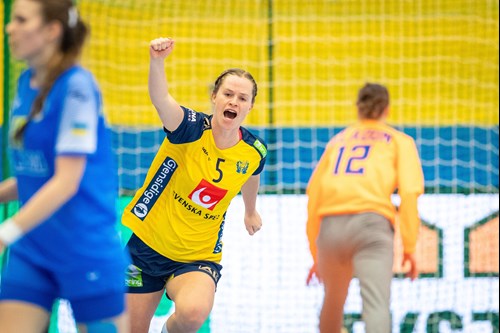 Earlier, Romania (35:20 vs North Macedonia) and Serbia (32:25 vs Slovakia) had straight-forward wins, like in the first leg, while Slovenia were pushed all the way by Iceland in an entertaining 21:21 draw.

ROUND PREVIEW: Europe’s 10 remaining places at the Women’s World Championship 2021 are on the line in the play-offs, with coverage on EHFTV

DRAW REVIEW: The draw for the qualification play-offs for the Women’s World Championship 2021 has been conducted in Vienna on Tuesday

DRAW PREVIEW: The draw for the play-offs in Women’s World Championship 2021 qualification will take place on 22 March

DAY REVIEW: Ukraine and Iceland beat Israel and Lithuania to progress to qualification phase 2 for the 2021 Women's World Championship