The DELO WOMEN’S EHF Champions League is taking a one-week break as the main round has gotten to the halfway mark.

Let’s see what happened last week and focus on another Cristina Neagu 14-goal outburst, we find out who is Rostov’s lucky charm, but we also do the maths with three rounds of matches remaining before the quarter-final.

Another milestone for Neagu

Six games, 50 goals. An average of 8.33 goals per game, second only to Buducnost right wing Jovanka Radicevic, who averages 8.77 goals per game this season. Cristina Neagu confirmed she is back to her best after her injury layoff, becoming the first player with two consecutive 14-goal outings in the European premium competition.

Without Neagu, CSM looked clueless at times in attack, but with the star left back in the fold, the Romanian side are better, more ruthless and also unlocked more goals via their line players. If CSM are to be successful this season, they will need more of the same from the Romanian star.

Vyakhireva, the lucky charm for Rostov

When Anna Vyakhireva plays, Rostov do not lose. The Russian side have five wins and one draw with Vyakhireva on the court. But when Vyakhireva sat out, Rostov won once and lost twice. The 24-year old right back has a plethora of individual awards, as she was the MVP of the EHF EURO 2018 and the Olympic Games in 2016, while also being selected as the best right back in the DELO WOMEN’S EHF Champions League last season and at the IHF World Championships in December 2019.

The 1.68m tall right back has been instrumental for Rostov this season, scoring 39 goals in only six games, including nine goals in the 35:31 win against FTC-Rail Cargo Hungaria last Saturday.

Her speed and creativity can break any defence and Vyakhireva will surely relinquish any opportunity to help Rostov this season. Having Vyakhireva fit will be key for Rostov in their attempt to seal their third DELO WOMEN’S EHF FINAL 4 berth and the Russian side looks different with her in the line-up.

A tightly-knot battle in Group I

While Group II has developed into a two-team affair between Györ and Brest, everything is still wide open in Group I. The difference between first and fifth place is only four points, while three teams – Metz Handball, Rostov-Don and Team Esbjerg are all at nine points.

There are still nine games to be played in this group, yet anyone can still challenge for the first place, including CSM Bucuresti, who are now fourth, but only two points behind the leaders.

Despite boasting an excellent start, Metz have only won three points out of six in the main round, as their challengers have closed the gap. The game between Rostov and Metz in two weeks’ time looks to be pivotal, while Esbjerg host Vipers Kristiansand in a must win game for the Norwegian side.

The surprise from Esbjerg

With so many powerhouses still in the competition, teams that spring a surprise or two may tend to get overlooked. But Team Esbjerg have slowly put together a five-game unbeaten run, after a surprising 31:31 draw against group leaders, Metz Handball.

After two wins against FTC-Rail Cargo Hungaria and Vipers Kristiansand, the Danish side are in a three-way tie with Metz and Rostov-Don for the first place in the group and are aiming high for their first ever DELO WOMEN’S EHF FINAL 4, after making the final of the Women’s EHF Cup last season.

Back Estavana Polman has taken her form from the World Championship back to the club team, scoring 24 goals in the main round for Esbjerg, while playmaker Sonja Frey has added 19 goals and a couple of assists.

Write off Esbjerg at your own peril, as the Danish side means business and is close to their first ever quarter-final berth in the European premium competition.

A break from the action

The DELO WOMEN’S EHF Champions League will take a one-week break now, but fiery clashes are on the horizon for the next round.

In-form sides like CSM Bucuresti, Brest, Györ or Esbjerg would have liked to have a round scheduled next week, but players will go for their national teams as the end of the main round of the European premium competition will be followed both by Olympic Games qualifiers and the EHF EURO qualifying round.

The challenge for the in-form sides will be to pick up where they left off and start fresh, with key clashes on the horizon in two weeks’ time, like the trip Györ will make to Brest and Rostov hosting Metz. 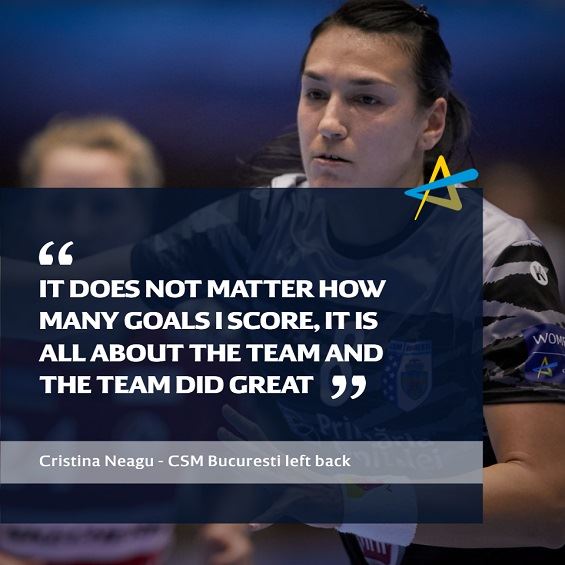 Best quotes of the week

Cristina Neagu, CSM Bucuresti left back:
“It does not matter how many goals I score, it is all about the team and the team did great on Saturday.”
The 31-year old Romanian ace has back-to-back 14-goal games in February and was the go-to player in the key wins for CSM against Metz and Vipers Kristiansand. However, Neagu declined the praises sang for her after these games and directed them all to her teammates, who helped her achieve these features.

Jesper Jensen, Team Esbjerg head coach:
“We are getting used to the fact that Estavana Polman is playing at an extremely high level and she was exceptional. I had the feeling we could make it, but it was small mistakes that punished us.”
Esbjerg have sprung another surprise, drawing 31:31 against Metz, but there was a hint of disappointment in the Danish camp despite the important point taken from the French side. Jesper Jensen, the team’s coach, sang the praises for back Estavana Polman, who has been nothing short of exceptional these past weeks.

Florentin Pera, SCM Ramnicu Valcea head coach:
“We can proceed to the quarter-final and everything is possible there. However, we were taught a lesson today, Györ were stronger than us.”
The Romanian champions limited Györ to only five goals scored in the first 20 minutes of the game, but failed to act on it in the second half. However, spirits are still high in Valcea’s camp, as they dream of a DELO WOMEN’S EHF FINAL 4 berth, after winning the Romanian title against CSM Bucuresti last season and also leading the domestic league before the mutual game against the two powerhouses in March.

No rest for the wicked: minutes after winning against Kristiansand, the CSM Bucuresti players went directly to the hotel and started the preparations for the next game, against FTC-Rail Cargo Hungaria. Still suited up, the Romanian side watched Rostov’s win against the Hungarian side (35:31) in the team hotel.