Kristianstad looked like they were going to win their third game of the the season in the VELUX EHF Champions League for the majority of the game.

But an outstanding Dean Bombac drove MOL-Pick Szeged to victory with 13 goals in total, as the Hungarian side came back from three goals down at half-time to win 34:32 in Sweden.

IFK Kristianstad have looked like strong contenders so far in Europe with wins against Rhein-Neckar Löwen and KIF Kolding at home.

The Swedish side began the key encounter against Szeged with a near-flawless first half, jumping to a 3:0 lead after four minutes.

It took Szeged several minutes to contain Imam Jamali, the Iranian-born Hungarian left back, who started a scoring spree for Kristianstad.

Loaned from Pick’s rivals, Veszprem, Jamali scored five goals, as Kristianstad powered on to a 6:3 lead.

Their lead was short lived, however, the hosts attacked with precision to go into half-time with a three-goal advantage at 19:16. 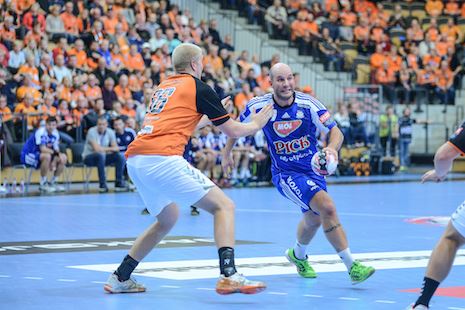 Szeged’s superior Champions League experience proved to be decisive in the final minutes of the game though.

As Kristianstad faltered in the last 15 minutes, the Hungarian side picked up the pace immediately and took the lead in the 46th minute.

Buoyed by an incredible Dean Bombac, Szeged improved their attacking efficiency to complete the comeback and win 34:32.

The Slovenian centre back scored ten of his 13 goals in the second half, while Jamali’s ten-goal effort was rendered useless for Kristianstad.

Szeged took a giant step toward qualifying for the next round, winning their fifth match this season.

On the other side, Kristianstad are still in sixth place, tied on points with Montpellier.

In Group B's earlier clash of the night, German league leaders Rhein-Neckar Löwen eased to a comfortable home win against French rivals Montpellier HB, staying in the hunt for a bye to the quarter-finals.

A solid all-round performance gave Rhein-Neckar Löwen an expectably easy win over Montpellier as the German giants moved up to second position in a fiercely competitive group with 11 points from eight games.

The result left RNL level with leaders Barcelona who have a superior goal difference and a game in hand.

The Lions thus completed an impressive double over Montpellier, having beaten them away 30:28 in a thrilling reverse fixture last weekend.

The encounter played out in Frankfurt produced no such drama, as the home side pulled away from the start, racing to a 6:2 lead thanks to a combination of fast breaks and unstoppable long-range efforts.

The lead soared to 15:8 in the closing stages of the first half, with Patrick Groetzki leading the charge with four goals.

Montpellier couldn’t deal with Rhein-Neckar Löwen’s pace and looked destined for a rout when they trailed 21:13 with 20 minutes to go.

However, visiting goalkeeper, Arnaud Siffert, then produced a series of stunning saves which allowed Montpellier to slash the deficit to just four goals, leaving the match poised at 22:18.

RNL swiftly moved up a gear though and restored a six goal advantage, 25:19, before the visitors salvaged some pride with two late goals, bowing out of the contest with their heads held high.

Löwen playmaker, Andy Schmid, said: "We stopped moving and playing in the last 15 minutes and we were not clever enough in the final stages to keep the advantage. But I am happy about two points.”

Montpellier face an uphill challenge to avoid exiting the VELUX EHF Champions League as the result left them seventh in the group with only four points from eight games.

Groetzki finished with five goals for RNL while Mads Mensah Larsen, Rafael Gonazles, and Uwe Gensheimer chipped in with four each.