The question was whether Dortmund themselves are surprised by their start to the DELO EHF Champions League 2021/22: five points following a draw and two wins from their first three matches, rewarded with the top spot in group A.

“Never before has a German women’s team been unbeaten and leading the Champions League after three rounds,” Ten Holte says.

“A lot of young players were added to our squad and usually you need some time before everything fits. So, nobody expected us to get so many points early in the Champions League.”

Dortmund hope to continue their impressive season overture in round 4 when they host CSM Bucuresti on Sunday (live on EHFTV at 16:00 CEST).

The contrast with last year, which was the German side’s debut season in Europe’s top flight, could hardly be bigger: From their first eight matches, Dortmund won just one and lost the other seven.

This campaign they have already beaten Buducnost BEMAX and last year’s finalists Brest Bretagne Handball, after they got a draw in the season opener against FTC-Rail Cargo Hungaria, the only other team still undefeated in group A.

While Dortmund’s rise to the top might come unexpected to many, it is not a coincidence.

The handball division of the yellow-and-black club, known worldwide for its men’s soccer team, has been building towards the future for years now.

“We have had a lot of changes in the squad. Each year between six and nine players left and were replaced. Of course, the club had the plan to become German champions,” says Ten Holte, who arrived in Dortmund in 2018 together with fellow Dutch goalkeeper Rinka Duijndam.

Dortmund, boasting a string of Dutch internationals, seemed on course for their maiden Bundesliga title in 2019/20.

They were leading the table when the season was called off in March 2020 amid the coronavirus outbreak but were not awarded the title – contrary to THW Kiel, who were leading the men’s Bundesliga and were officially declared champions.

That missed title gave Dortmund even more motivation for the 2020/21 season.

“Especially after that corona season where we didn’t get the title, we were all like: ‘Oh no way, we must get this title now because we already deserved to have it.’ At the start of that season, we didn’t need to talk about our targets. Those were clear to everybody: We wanted that title,” Ten Holte says.

Dortmund passed the test with flying colours and won the domestic championship without losing a single match.

The Champions League in 2020/21, however, was a different story.

“In the beginning we felt that the difference between the Bundesliga and the Champions League was gigantic. We had a few matches where we were well ahead but still lost by one or two goals in the end,” Ten Holte says about the team’s lack of international experience last season.

Dortmund certainly learned their lessons and have vastly improved coming into the current campaign. 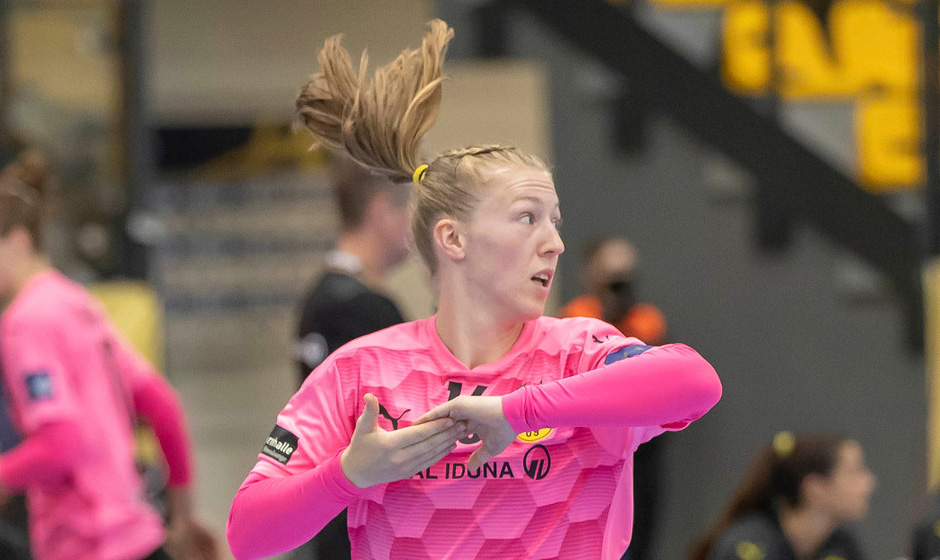 I think it is going to be an interesting game (against CSM). Because we are the surprise package of the season so far – and we like to keep it that way.
Yara ten Holte
BV Borussia 09 Dortmund goalkeeper

That is also the story for Ten Holte herself, who joined Dortmund three years ago as a teenager.

“It was a very important step for me. I went to Dortmund at a relatively young age, at 18,” says the goalkeeper, who turns 22 in November and is studying human movement science.

Ten Holte, whose parents are running a swimming school in Almere, tried tennis, judo, swimming, and handball as a kid before opting to focus solely on handball at the age of 12.

She joined SV Dalfsen Handball and already made her debut in the Eredivisie, Netherland's top flight, at age 14. She was named Dutch goalkeeper of the year in 2016/17 and 2017/18.

“I felt like I couldn’t learn new things anymore there, so I had to make the next step. I signed with Dortmund for three years right away, so I got the time to develop and wasn’t under pressure to immediately perform on the highest level,” says Ten Holte, who had her national team debut for Netherlands in a friendly against Germany in October 2020.

“You need that time because the difference between the leagues in Germany and Netherlands is massive. International experience is very important for me as goalkeeper.”

At Dortmund, Ten Holte mainly was a back-up for Duijndam and for German national team goalkeeper Isabell Roch. She additionally played for second division side TuS Lintfort last season in order to get more minutes on court.

But both Duijndam (Thüringer HC) and Roch (SCM Ramnicu Valcea) have left the club last summer. Dortmund signed another German international, 24-year-old Madita Kohorst from TuS Metzingen, to team up with Ten Holte for a young goalkeeper duo.

Ten Holte set the tone for the season so far as she had an outstanding save rate of over 47 percent in Dortmund’s first match against FTC, highlighted by a terrific last-second stop that salvaged the draw.

“In that match it all went very well. The team did well and was happy that I as the goalkeeper saved some important shots. That gave them even more confidence,” says Ten Holte, who also had high save rates of 27.8 and 31.6 per cent respectively in the following matches, against Buducnost and Brest.

Next up for Ten Holte is an intriguing game on Sunday, when CSM will bring Tess Wester to the Helmut Körnig Halle in Dortmund. Wester is the No. 1 goalkeeper in the Dutch national team, ahead of Duijndam and Ten Holte.

“Of course, it is special to play against a teammate from the national team. That certainly adds something to the match,” Ten Holte says.

“We want to get the points, so if I can stop a few more shots and help Dortmund win, that would be great. But in the end, it is not about me, it is about the team. I think it is going to be an interesting game. Because we are the surprise package of the season so far – and we like to keep it that way.”

Esbjerg jump top of the standings with sixth win

GROUP A REVIEW: Team Esbjerg capped off an incredible 2021, with their sixth win in eight games in the DELO EHF Champions League, 34:24, aga…