“These gold medals are the reward for hard work”

“These gold medals are the reward for hard work”

Denmark women’s head coach Morten Chang Holmen jumped for joy, threw his cap high up in the air and sprinted to his celebrating players, who were all lying on the sand.

Ann Cecilie Möller had just scored a last-second goal to help Denmark beat Hungary 2:0 (18:12, 23:22) in the final of the Beach Handball EURO 2019 in Stare Jablonki on Sunday.

Denmark, silver medallists in 2011 and 2013, had finally won their first gold.

“This means everything,” Holmen told eurohandball.com. “We have fought for this 10, 11 years now. We had second place, we had third place, now we have this gold medal. That means a lot, for the girls, for me, for whole beach handball in Denmark. An amazing job the girls have been doing this tournament.”

And things would become even better for Denmark - much better.

Two hours after the women earned their title, the men’s team repeated the feat by downing Norway 2:0 (15:18, 19:16), also for their first ever gold medal.

“It feels absolutely amazing,” Joachim Trend Hansen said when asked about holding the golden plate in his hands.

“When we beat Spain convincingly 2:0, we knew that we could beat anybody. I think that was decisive,” Hansen said.

One match made the difference

Also for the women’s team, one match made the difference, according to head coach Holmen.

“We played Germany in the second match. We won in a shoot-out after we had lost the first set very big. We turned that around,” Holmen recalled. “From that moment on, we told ourselves, we can go and reach the gold.” 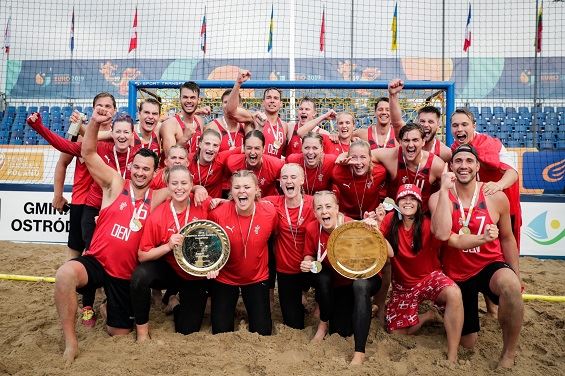 For Holmen, the strength of the women’s team is being a true team.

“We don’t have one or two players, we have 11 players who fight as a team,” he said. “That is why we get the gold today.”

Team spirit has been a decisive factor

The same applies to the Danish men’s team. Their team spirit has been a decisive factor in the road to gold. The team of head coach Gorm Andersen was regarded as an outside contender for the title, but they themselves were well aware of what they are capable of.

However, it took them until three days into the tournament before realising that their golden dream could really come true.

“Once we beat Spain, we were aiming for the podium,” men’s head coach Andersen said.

Winning both the men’s and the women’s title will give beach handball in Denmark a further boost. The sports has developed well over the years, according to Andersen.

“People are starting going to the beach in February, when it is cold in Denmark. And they start playing beach handball fully dressed,” the head coach said. “This gold means that we are getting something for the hard work. We also get a lot of support from the federation. So it means a lot for us.”

And the old saying that reaching the top is easier than staying at the top will not apply to the Danish men’s team.

“We don’t have a lot of old players, and the old players we have are totally fit,” Andersen said. “We will be on the top for some years, I am sure.”

Next Article Kristopans and Pena scoop Player of the Month awards