Defending champions France were knocked out by Portugal in a thrilling quarter-final at the 2019 IHF Men’s Youth (U19) World Championship in Skopje this week, putting the Portuguese through to their first-ever semi-final in this competition.

The other semi-final is an all-European affair as former champions Denmark play Germany.

Portugal will face Egypt in tomorrow’s semi-final, continuing a stunning tournament for a side which only made it into the competition as a replacement team. Portugal finished seventh at their debut Youth World Championship in 2017.

After finishing undefeated and top of Group D in the group stage of this year’s competition, Portugal went on to book their place in the quarter-finals with a 29:25 win against hosts North Macedonia.

Facing France in the quarter-final, Portugal moved into the lead after 10 minutes and held off repeated attacks to win 31:26. Martim Costa was named player of the match after scoring 11 times for Portugal.

Egypt beat Iceland 35:31 in a strong performance to book their semi-final place against Portugal. 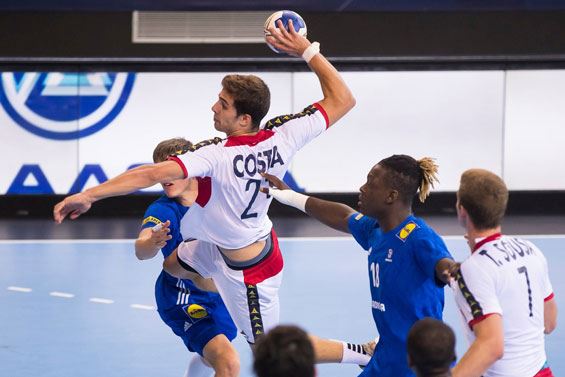 On the other side of the draw, three-time champions Denmark were forced to come back from a 9:10 deficit at the break to beat Spain in their quarter-final.

The Spaniards showed better defensive skills in the first half of the match, but a stronger performance by Denmark – particularly from player of the match, goalkeeper Svend Bro Rughave – saw the Danes take the win. Rughave made 10 saves during the match, including seven in the second half.

Germany also played a European quarter-final, against Hungary. The Germans stormed to an early 7:4 lead and never looked back, ultimately winning 26:16 after taking the first half 14:7.

The German shot efficiency was an impressive 65% and Julian Koster was named player of the match after netting six times from six attempts.

Portugal will play Egypt at 17:30 local time on Saturday, while the semi-final between Germany and Denmark takes place at 20:00 local time.

More information, including the live stream, latest news, statistics and live scores, is available on the official IHF competition microsite.