For a moment the heads of the Greek players went down on Court 2 on Thursday afternoon, having suffered their third straight defeat at the Women’s Beach Handball EURO 2019.

In their second match of the main round, Greece lost the first set 21:16 to unbeaten Denmark but nearly took the match into a shoot-out before also conceding the second set, 17:16.

The heads of the players were not down for long, though.

Because world champions don’t give up that easily.

A year ago Greece suddenly reached the summit of international beach handball. The team of head coach Maria Karantoni defied all odds by winning gold in Kazan, Russia.

It was their first appearance at a World Championship, but in the knockout stage they navigated their way past experienced opponents like Russia, Spain and, in the final, Norway.

“Becoming world champions means that now in Greece all people know what beach handball is,” head coach Karantoni tells eurohandball.com. “Also, now beach handball has more attention from the federation and they try to help us even more than in the last years.” 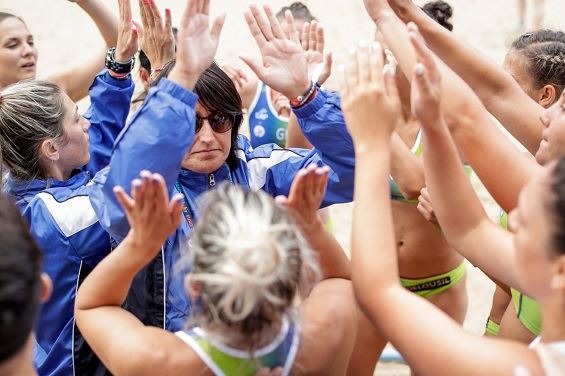 Fast forward 12 months and Greece are playing their first major tournament as the world champions. The squad has hardly changed and is a nice blend of talent and experience - with an age difference of 29 years between the youngest player, Nikolina Kepesidou (17), and the oldest, Vasiliki Skara (46).

Greece are lacking big results from their four previous European Championships, losing in the preliminary round in 2007, ’11 and ’13 and in the quarter-final two years ago in Zagreb.

But while winning the world title came as a huge surprise, it has inevitably included Greece in the cycle of favourites to lift the trophy in Stare Jablonki on Sunday.

“Now we have the attention of all the other teams. Every other team know our strategy and they know how we play,” says Karantoni, adding it put additional pressure on her team. “Yes, I think so. We didn’t have this experience as we are one-time world champions. From now on we will handle things better.”

A painful loss to the team

As many members of her squad also play indoor handball, Karantoni had only about two weeks to practice with her full selection of players in the build-up to the tournament.

“In this small preparation period we couldn’t change so many things, like tactical moves,” the head coach says. “This is our biggest problem coming into this competition with so many strong teams.”

Still, Greece started the tournament with three straight wins before another big problem occurred in their first main-round game on Wednesday. In the first set against Germany, goalkeeper Magdalini Kepesidou badly twisted her ankle and was ruled out. Greece still won that set but ultimately went down in a shoot-out. 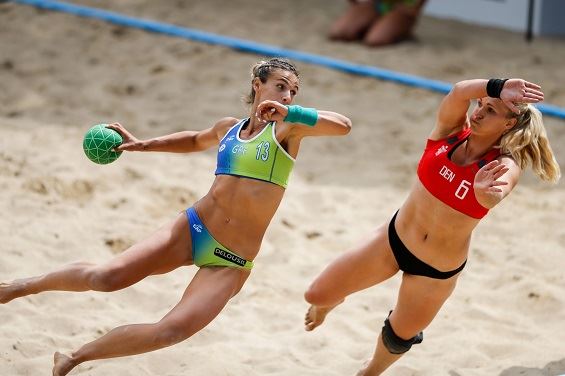 Missing Kepesidou means a painful loss to the team. At the EURO in 2017, Greece had the second-best goalkeeper stats of the tournament with a 41-percent safe rate, second only to champions Norway. And Kepesidou was the fourth-best goalkeeper at last year’s worlds with 32 percent.

“We have a lot of problems because of Magda's injury, because we lose also the fast pass,” says Karantoni, admitting that the goalkeeper’s injury also has affected the team mentally.

“Exactly, this is a problem,” she says. “To be honest, we should have won yesterday, although we lost our goalkeeper, our defence and the player that went goalkeeping were playing very good. But again we had problems with the attack. Maybe mentally they have a problem, but on this level you shouldn’t.”

Greece are still on course for their goal

While Greece have had their fair share of headwinds at the Beach Handball EURO 2019 so far, Karantoni is quick to point out that the team is still on course for the goal it set before the tournament: finishing in the top five or six.

Greece face a must-win game against Ukraine on Friday morning as victory would seal their place in the quarter-finals.

From there, anything could happen - as the world champions know all too well.