Montpellier Handball won another victory in the group phase of the VELUX EHF Champions League and continue to lead Group D. With a fast pace from the start of the game, the French team got an important advantage in the first half that was crucial to pick up the two points.

Montpellier travelled to Lisbon to continue their successful VELUX EHF Champions League campaign and, thanks to a great start, that is exactly what they did.

From the start, Sporting was unable to find solutions to get through Montpellier coach Patrice Canoyer’s 5-1 defence. Montpellier put a fast pace on the game and was soon able to get a comfortable advantage.

The French side took advantage of Sporting's lost balls and missed shots and, with a fast attack, kept increasing their advantage. On the right side, Aymen Toumi was one of the keys to Montpellier's eight-goal advantage at the break.

In the second half, and with former Montpellier player Felipe Borges on court for the hosts, Sporting improved and showed a new face.

Michal Kopco and Edmilson Araujo's goals and saves by Aljosa Cudic gave hope to Hugo Canela's team and Montpellier found it harder to control the game. Sporting reduced the disadvantage but it was not enough to erase their first half performance.

In the end, Montpellier won by four goals and got two more points to add to their tally. 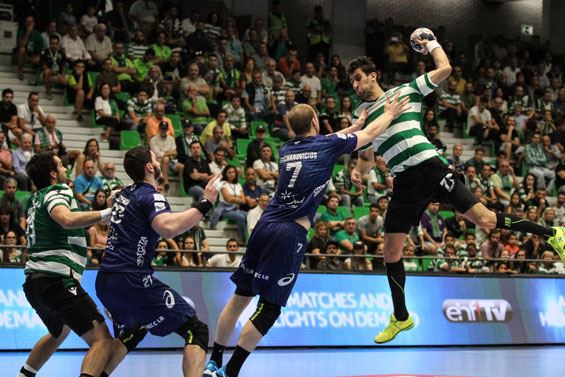 Melvyn Richardson and Jonas Truchanovicius were Montpellier's top scorers with six goals each. On the Portuguese side, Araujo also scored six goals.

“I’m very happy with this victory. We dominated the first-half but the second was very difficult. Sporting has a really good team and we loved playing at their home,” said Canoyer.

Sporting’s coach explained that his team knew that the French always had “a really strong start” and his team wasn’t capable of control.

“We made lots of mistakes and, maybe, if the first 15 minutes had been different the final score would also have been different,” added Canela.

Next Article Nine-goal lead not enough for Csurgo