Eying a spot at the Women’s World Championship 2021 in Spain, 17 European teams learned their opponents for qualification phase 1 during the draw in Vienna on Wednesday.

Phase 1 only includes teams which do not take part at the Women’s EHF EURO 2020 in Norway and Denmark in December.

The 17 teams were seeded in four pots based on the Women’s National Team Ranking valid for the EHF EURO 2020.

Each group will be played in a tournament format at one venue on either 27–29 November or 4–6 December 2020.

The right to organise the five tournaments was also drawn, with Luxembourg (group 1), Greece (group 2), Turkey (group 3), Austria (group 4) and Belarus (group 5) given the first right to host their respective tournament. 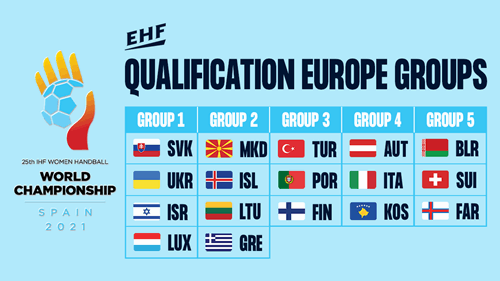 For 10 of the teams the dream of a trip to Spain will remain alive, as the top two from each group advance to the phase 2 play-off matches, which will be scheduled between 16 and 21 April 2021.

The play-off matches will also feature 10 teams from the EHF EURO 2020, which have not yet qualified for the World Championship 2021.

A total of 16 European teams will play at the first 32-team World Championship next year. Spain as the hosts and Netherlands as the reigning champions are qualified directly, leaving 14 places from Europe up for grabs.

The four best-ranked teams at the EHF EURO 2020 will join Spain and Netherlands at the World Championship, leaving 10 remaining tickets for the winners of the play-off matches.