A success story spread all over Europe

A success story spread all over Europe

When Mar Valencia took a clear 26:16 home win over Vikingur Reykjavik on 26 September 1993, a new era of women’s sport had started in Europe.

While many other team sport federations were only focussing on their male competitions, the European Handball Federation has treated the Women’s EHF Champions League equally to its male counterpart from this first match in Spain until today.

And the EHF has been fully right with this approach. Meanwhile - in the 2016/17 season - a cumulative audience of 167.5 million people watch the matches of the Women’s EHF Champions League, 300,000 users follow the competition via Facebook, 18,000 take part in the All-star Team voting and 10,000 fans cheer for their teams at the FINAL4 in Budapest.

But where did it all start from? Similar to the men, the EHF took over the women’s club competitions from the IHF at the start of the 1993/94 season.

The last winner of the IHF Champions Cup also became the first winner of the new EHF Champions League - Hypo Niederösterreich. Four times during the span of the 1988/89 to 1992/93 seasons, the team of legendary coach Gunnar Prokop took the trophy under the old name, and four times between 1994 and 2000 under the new name.

The last two seasons, however, Hypo have missed out on the group matches after 23 straight participations in the first 23 seasons.

Winners from all over Europe

In contrast to its male counterpart, where the first eight trophies were all won by Spanish clubs, the Women’s EHF Champions League produced winners from all over Europe: Koprivnica from Croatia, Valencia - including top star Natalia Morskova - from Spain, Dunaferr from Hungary, Kometal from FYR Macedonia. So far, clubs from 13 different nations are on the winners’ list.

Thanks to the Kometal women and the Vardar men, Skopje is the only city with Champions League winners from both genders. Overall, only three countries have male and female teams who lifted the coveted trophy: Apart from FYR Macedonia, this feat has been achieved by Spain and Slovenia. 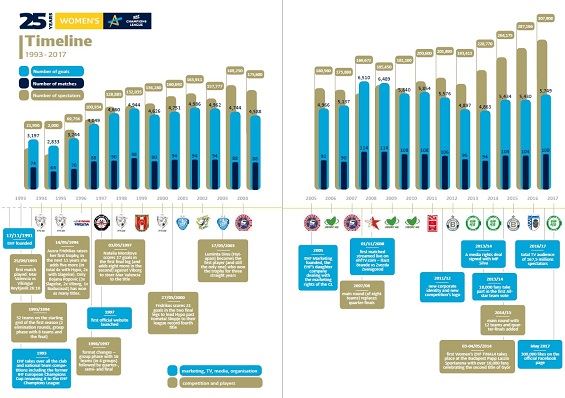 In the years 2001-03, a Romanian player made Champions League history as goalkeeper Luminita Hutupan (today Dinu) became the first woman to raise the trophy three times in row.

At that point another Champions League legend had already four trophies in her cabinet: Soviet-born Austrian Ausra Fridrikas was part of all Hypo wins - and when the strong Danish era in the Women’s Champions League started, she added two more titles with Slagelse.

With former prolific superstar Anja Andersen as their coach, Slagelse had gathered the very best players in women’s international handball to dominate the competition and win it three times.

As Viborg HK added three more trophies, Denmark holds the record for most Champions League titles with six, ahead of Austria and Hungary with four titles each.

And one player was part of five of those six victories: Bojana Popovic. The Montenegrin standout won the Champions League three times with Slagelse and twice with Viborg before crowning her glorious career with a sixth trophy as Buducnost Podgorica beat Györ in the 2011/12 finals in Popovic’s last Champions League match of her career.

One male coach made history by steering two different clubs to the three major EHF club titles: Evgeni Trefilov, who also led Russia to four word titles and Olympic gold. He coached Lada Togliatti to the Cup Winners’ Cup title and Zvezda Zvenigorod to their wins in the EHF Cup and the Champions League.

Zvezda became the first ever debutant to raise the Champions League trophy, a feat later matched by CSM Bucuresti in the 2015/16 season.

Györ made the headlines when the Hungarian side became the last winners under the old format in 2012/13, and lifted the trophy again the following year as winners of the newly implemented EHF Women’s EHF FINAL4.

Like the men since 2010, the women got their own FINAL4 event four years later - at the Papp Laszlo Arena in Budapest, named after the famous Hungarian boxer who won three Olympic gold medals in the 1940s and 50s.

The playing system of the Women’s EHF Champions League has been improved several times over the years. It started with a qualification, a group phase with eight teams and the finals. Later, the main round as well as the quarter-finals and semi-finals were introduced, while nowadays the marquee event of women’s international club handball is the FINAL4.

Previous Article Lazarov: "I'm coming out of my comfort zone."

Next Article Sporting secure both points against struggling Bears