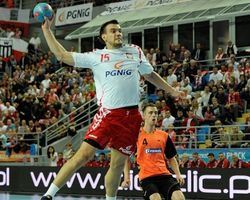 After being left out of the Polish squad for the EHF EURO 2014 qualification games, where Poland had a great start with two wins in matches against the Netherlands and Ukraine, Vive Targi Kielce left back Karol Bielecki is making a comeback after being nominated by head coach Michael Biegler for Poland's preparations for the 2013 World Championship in Spain.

Kamil Syprzak who plays his club handball for Orlen Wisla Plocka is also back in the squad, after he missed the last two games because he was injured.

Marcin Lijewski who spearheaded Poland’s run to the silver medal at the 2007 World Championship and was chosen for the German Bundesliga All-Star Game has been left out of the 24-man squad.

He announced the end of his career in the Polish national team, also stating that a comeback is unlikely to happen.

"It was really a nice surprise for me. Not long ago, I watched games on TV and now I will be part of the national team.

“It's such a proud accomplishment to be called up to play for your country at any level, but to be called into the senior side is probably the proudest moment of my career so far. I am looking forward to the experience," Przybylski said.

Biegler also announced the plan of preparation for Poland. The team will gather on 17 December in Pruszków, and travel to the capital, Warsaw, where the squad will train until 3 January.

In that period, Poland will have rest days for the Christmas and the New Year.

The Biegler’s team will continue to work to play an international tournament in Czech Republic, from 4 to 6 January against the host, Hungary, and Slovakia.

On 7 January, Poland will come back to Poland and then they will fly to the Iberian Peninsula.

Poland squad for the 2013 World Championship: