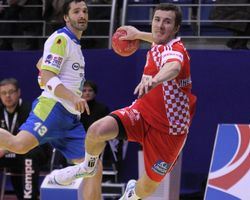 For the first time in 10 years, one of Croatia's top players, Ivano Balić, was not called up to the National Team.

Besides Balić, Venio Losert from Kielce also did not receive the call.

At a press conference regarding this announcement, Slavko Goluža said:

“As I said before, we will use this World Championsip to save some our players a bit and to let younger players show what they can do.

“I also want to see how Drago Vuković can do with Duvnjak in Ivano's position.

“He has been playing very well after recovering from injury.”

“I haven't written Balić off, qualifications for the EURO are coming and we'll play two hard matches against Hungary. We'll see.”

''This WC doesn't bring any additional qualification for any other competitions, so it is possible that I'll even take four or five younger players to Spain.”
In the end he concluded: “If we progress from our group, we'll play against teams from Group C (Serbia, Slovenia, Poland, South Korea, or Belarus).

“That's going to be a very important match for us. We have to reach top form by then.”

28 players have been selected for the preparation phase. Slavko Goluža has said that 16 or 17 players will be on the final list.