Bolstered Flensburg hope to go all the way

30 years ago, SG Flensburg-Handewitt was founded by two former rivals. This season, the German side hope to repeat their highlight of the club’s history: winning the trophy in 2014.

With some interesting new arrivals for 2020/21, coach Maik Machulla’s team is eager to go all the way.

Most important question: Do SG Flensburg-Handewitt have the power to make their dream come true?

With 38 Bundesliga matches ahead and many national team players who are part of the upcoming World Championship and the Olympic qualification tournaments in the squad, it will be a tough job to go all the way in the EHF Champions League. Flensburg’s advantage is the depth of the squad and the fact that coach Maik Machulla knows how to rotate to the optimum advantage.

Nevertheless, other clubs from less intense domestic leagues seem to have other advantages in terms of saving power for the road to Cologne.

Under the spotlight: Mads Mensah Larsen

The Danish World, Olympic and EHF EURO champion is the top signing for Flensburg for the upcoming season. The left back will add some distance shooting power to the team. Mensah is experienced and definitely fits well in SG's large Danish community. 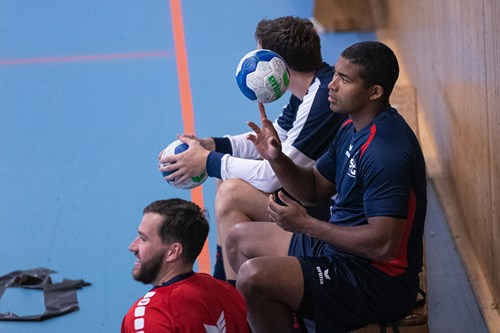 “After a really tough season because of COVID-19, we are looking forward to playing in the EHF Champions League again. It will be a very exciting tournament. Our objective is to reach the EHF FINAL4 in Cologne,” says club manager Dierk Schmäschke.

Team captain Lasse Svan shares those hopes: “We are definitely trying to reach the (EHF) FINAL4 again. To play in Cologne is very, very special. Before that, we are looking forward to facing many great teams in the group phase.”

SG Flensburg-Handewitt have their 16th appearance in the EHF Champions League ahead of them.

After THW Kiel in the year 2000 and SC Magdeburg in 2002, they were the third different German finalists in 2004 – the same year SG celebrated their first German championship.

Newcomers and left the club

“Barça are an example to follow in European handball”

FEATURE: FC Barcelona President Joan Laporta and EHF President Michael Wiederer sat down for a talk about all things handball

FINAL PREVIEW: Barça play their 13th Champions League final and Aalborg their first, but which history-maker will lift the trophy?

Barça make it to their 13th Champions League final