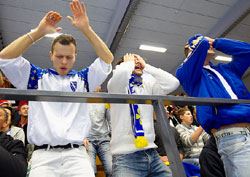 After signing a new coach, Irfan Smajlagić, the arrival of a bigger sponsor is another good news for Bosnian handball fans.

Captain of the team Petar Kapisoda is very pleased with latest developments:

“I want to thank our sponsor and city Sarajevo for all the support they are giving. I'm convinced this will help us to achieve better results this season. The players are very satisfied to have an opportunity to work with coach Irfan Smajlagić. During our preparations in Kranjska Gora he showed us why he is one of the best coaches in the world.“

After finishing the tounament in Doboj second – Bosna was defeated by Vardar in finals – "Studenti“ continue with hard work. The last phase of the preparations will be held in Poreč and Sarajevo.

ROUND PREVIEW: While four unbeaten sides try to extend their records, FTC face a challenge in the Match of the Week against Esbjerg

Veszprém count on a great start and a strong goalkeeper

GROUP B REVIEW: Thanks to their best offensive performance of the season in the Champions League, Paris took the points against Zaporozhye

Flying Mem helps Barça get back to winning ways

GROUP B REVIEW: Thanks to 12 goals from Dika Mem, Barça recovered from their loss against Veszprém to remain on top of group B

GROUP A REVIEW: Mathe and Grøndahl the keys for a major sensation, while Pick lose top spot in the group

Márton: Every particle of me is about handball

FEATURE: It has been a big couple of years for FTC's Gréta Márton, who saw some of her handball dreams come true after overcoming challenges

GROUP A REVIEW: After beating THW Kiel in round 3, Montpellier took the points against another club that had previously won Europe's top pri…