Corrales on 2018: “Germany was most special game in my life”

Corrales on 2018: “Germany was most special game in my life”

With the VELUX EHF Champions League and the French domestic championship currently on hold amid the measures against the spreading of COVID-19, Rodrigo Corrales has been getting used to a rather unusual life in Paris.

The Spain and Paris Saint-Germain HB goalkeeper admitted it was difficult in the beginning as he missed the time with his teammates on court and in the locker room.

“I miss sharing these moments, especially as this is my last season in Paris,” said Corrales, who will move to Telekom Veszprém HC next season.

“I can say that I have adapted to this new situation,” he added. “For example, now I have more time to talk with my friends through different applications, I can spend more time with my family, and I started to cook new dishes. I also started to try painting but I am really bad so I stopped it.”

"It makes me proud to represent my country"

In an Instagram Live interview with ehfTV.com commentator Chris O’Reilly on Wednesday, Corrales reflected on Spain’s gold rush at the EHF EURO 2018 in Croatia.

The European Championship from two years ago is featured on the EHF EURO Facebook page and YouTube channel this week, with the final between Spain and Sweden to be streamed in full tonight (Thursday 9 April) at 18:00 CET.

Corrales’ career in the Spanish national team started with a friendly against Switzerland in 2014 and has been highlighted by back-to-back EHF EURO triumphs.

“To play in the national team of Spain is really difficult because the players are really, really good. So it makes me proud to represent my country, to play with these best players,” Corrales said.

"People said it was time for the gold medal"

After four-time silver medallists Spain had been fourth in 2012, third in 2014 and second in 2016, they came to EHF EURO 2018 in Croatia as one of the main title candidates – even though they had missed the 2016 Olympics and gone out of the World Championship 2017 at an early stage.

“People said it was time for the gold medal. But we had changed a lot of players in 2017 and we knew it was really difficult,” Corrales said about going into the EHF EURO 2018. “The level of the different teams was so high, with Denmark, Germany, Croatia, Norway.”

Still, Spain worked their way through the preliminary round and the main round, suffering one defeat in each phase, when the all-decisive match against Germany was next.

"Germany is the game I have the best memories of"

This repeat of the 2016 final, when Germany won, would decide about which team would advance to the semi-final.

“The game against Germany is the game I have the best memories of. It was the most important game maybe that I played in my career,” Corrales said. 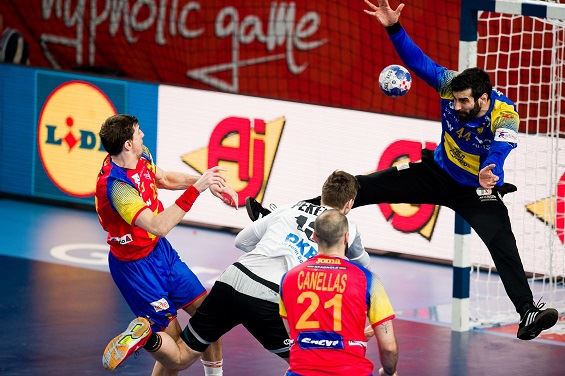 The goalkeeper’s tournament had derailed a bit after his under-par performance in the preliminary round against Hungary. Spain won that match 27:25 “but I did not play good so after this game I didn’t play that much in the tournament.”

“But unfortunately, he got injured so suddenly I had to go in,” said Corrales, whose outstanding performance helped Spain win the game 31:27.

“I am really proud of how I reacted in this game,” he said. “I can say it is the most special game in my life, also because it was my (27th) birthday. It was like, if we lost, it was not a good birthday present.”

Spain went on to beat France in the semi-final and Sweden in the final for their first ever EHF EURO title – though it took them only two more years to win another gold medal last January.

“2020 was completely different,” Corrales said. “We were really focused on getting the Olympic qualification. All teams were fighting like crazy. We had the responsibility to defend the gold medal from 2018 but I don’t think we were favourites.”

According to the goalkeeper, it was the team effort that won them the trophy again.

“Our coach always says: ‘The most important for us is the team.’ If another player on your position is playing and he is playing good, then you support him,” Corrales said. “We were really intelligent, we split the time between the players. In the end, for me, this was the key of this tournament.”

Spain have a rich tradition of outstanding goalkeepers

While Spain have a rich tradition of outstanding goalkeepers, Corrales underlined the excellent cooperation between them, even though they are rivals for the same position.

“We have a really good relationship,” Corrales said about Perez de Vargas, who earlier called his cooperation with Corrales “like a marriage.”

“But also with Arpad (Sterbik), he is one of the best in history,” Corrales added. “He is a guy who always tries to help, who is in good mood. With Arpad it was always fantastic. Of course, he always wanted to play, but if it was not the case for him, he always wanted to teach us and to help us. It was fantastic to have him as a teammate.”

"To have Arpad close to me is really good"

While Sterbik, currently playing for Veszprém, has announced his retirement, Corrales is preparing for a new chapter in his career at the Hungarian club – with Sterbik even closer to him than ever before.

“To have him close to me is really good,” Corrales said. “When you see Arpad, you see that he has got this natural talent. When you see his style of saving, it is so natural. It seems so simple, but he is a guy that works so hard, also with video analyzing. He knows every player.”

While Corrales was looking forward to his new task, he was yet unsure how his time at PSG will end.

“We don’t know if we can play another game. Of course, I had a great time here: in the French championship we did great things all these three years. But the Champions League, we still want to win it,” Corrales said. “I would like to have the opportunity to play (the VELUX EHF FINAL4) with Paris. But anyway, I am satisfied with the time I spent here.”

Previous Article Test your knowledge of the VELUX EHF FINAL4 2018

Next Article Apply now for the next European Handball Manager programme