Despite going into their debut campaign in the DELO EHF Champions League, CSKA were aiming high before the start of the 2020/21 season.

So far, they have confirmed their ambitions with excellent results.

The Russian team are ranked second in group B with 17 points, one point behind Györi Audi ETO KC. But over the next few days they will have the chance to not only go top of the group, but also book an early quarter-final ticket.

To reach this goal, CSKA need to win both rescheduled matches against HC Podravka Vegeta, which will be played as a double-header on Sunday and Monday in Moscow (live on EHFTV).

The team’s captain, Darya Dmitrieva, hopes that CSKA will get the job done.

“Hopefully there will be no surprises in our matches against Podravka. The opportunity to claim a quarter-final spot gives us a great motivation,” she said.

“It will be very hard to play two games in two days, considering that we had a tough match in the Russian league against Astrakhanochka (31:29 win) on Thursday. But our goal is to win twice.”

For the 25-year-old centre back, CSKA’s results in the competition are hardly surprising.

“We have a good team with excellent players. Early in the season, we lacked team chemistry, and we had problems in some matches – for example, in Dortmund where we were down by seven goals but managed to win. But now we are stronger as a team,” Dmitrieva said.

The Russian side are determined to go far in the competition, but can they actually go all the way and claim the title?

“It is a good question, I don’t know. A lot will depend on our morale and physical form. But it would be really cool to win the Champions League in our debut season,” Dmitrieva said. 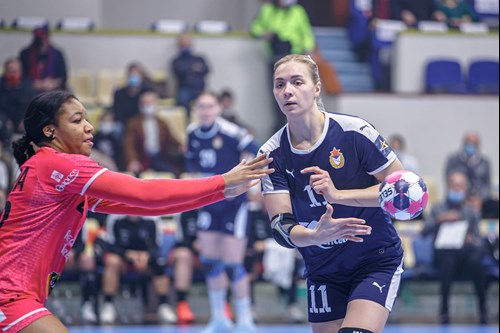 While CSKA are in their debut season, their captain has played the continental top flight before. As a young talent, she even reached the EHF FINAL4 in 2015 with Dinamo Volgograd, losing to Larvik HK in the semi-final.

But at the time Dmitrieva was taking it easy: “I was just 19 and didn’t realize what it means to play at this level. Now I do, and my emotions are different.”

In 2015, the playmaker moved from Volgograd to Handball Club Lada, where she spent the following four seasons before joining CSKA in 2019. However, she had to miss the whole 2019/2020 season due to an Achilles tendon injury.

“It was hard, especially mentally, because I had never had serious injuries before that. I had to stay out of the team, away from travelling, and it was hard. I felt estranged, but it also helped me to realize the value of being part of the team.”

She still feels the consequences of being sidelined for many months.

“It is always hard to get back in shape after an injury. Gradually I have been improving, and I want to believe I have been helping the team, but I feel that I don’t yet play at my 100 percent.”

CSKA’s Danish coach Jan Leslie is the first foreign tactician in Dmitrieva’s career. However, she is already used to his working style.

“Of course his mentality and approach to work are different from what I had seen before. For example, at Lada we used to have a training on the court on match day. But Leslie doesn’t do that, he focuses on tactical work instead.”

And the language barrier is not a problem for Dmitrieva: “Now I can speak English. I learned it by myself, from listening to songs and watching TV series.”

Also captaining the Russian national team, Dmitrieva and her teammates hoped to earn a medal at the EHF EURO 2020 in Denmark - but finished only fifth.

“Of course it was a frustration, we could have done better. I still can’t understand what happened in our last main round match with Denmark, which we lost 30:23,” Dmitrieva said. “I have been thinking about it a lot but couldn’t get an answer.”

GROUP B REVIEW: Elena Mikhaylichenko's 10 goals helped CSKA to claim a three-goal win against the title-holders

GROUP B REVIEW: Odense climbed to third place in group B after beating Krim by two goals in a hard-fought match

CSM cruise to victory against Buducnost

GROUP A REVIEW: CSM Bucuresti powered to a 30:22 win against Buducnost, handing the Montenegrin side their fifth loss in a row this season

GROUP A REVIEW: Esbjerg enjoyed their third win of the season, 27:26, despite a late comeback attempt from Podravka

GROUP A REVIEW: FTC-Rail Cargo Hungaria are now on a five-game unbeaten streak this season after a crucial 28:27 win against Brest Bretagne

GROUP A REVIEW: Rostov's early seven-goal lead against Dortmund helped them hand the German champions their second loss in a row, 37:27

SUMMARY: Full coverage of round 5 of the DELO EHF Champions League, including Saturday's MOTW and Sunday's three games

NEWS: Germany in the men and Hungary in the women keep their number one spots in the EHF's place distribution for the 2022/23 club season.