Duvnjak and Mikhaylichenko become first-time EHF Players of the Month

Duvnjak and Mikhaylichenko become first-time EHF Players of the Month

It comes as no surprise that a 18-year-old talent gets her first EHF Player of the Month award, but it is quite unusual that a former IHF World Player of the Year, VELUX EHF Champions League winner and three-time EHF EURO silver medallist has been made to wait so long to claim his first award in this vote among EHF journalists.

Elena Mikhaylichenko of Russian side Lada Togliatti was rewarded for her outstanding role as top scorer in the Women’s EHF Cup, while THW Kiel and Croatia team captain Domagoj Duvnjak receives his next award after becoming MVP of the EHF EURO 2020 for his outstanding performance and leadership, steering Croatia to the silver medal.

"It is really cool"

18-year-old Elena Mikhaylichenko was elected EHF Player of the Month for the first time in her career. The talented left back from Handball Club Lada became the third Russian player after Daria Dmitrieva and Anna Vyakhireva to claim the award.

Mikhaylichenko was happy to learn the news: "It is very unexpected and a great pleasure to be honoured like this. I do not even know what to say, I am full of emotions, it is really cool."

Lada's teenage star has had a big impact in the Women's EHF Cup group phase. In January, she scored 37 goals in four matches and is currently the competition's top scorer with 60 goals.

"It was really one of the best months in my career, also statistically. In the EHF Cup, I converted my chances well, and probably that us why I became player of the month," the Russian international said.

Despite Mikhaylichenko's heroics, Lada now sit in third place in group D. The Togliatti-based side still have a chance to go through, but they need to beat the group leader Herning-Ikast away on Sunday and also hope for Bietigheim to defeat Storhamar.

The young player believes that reaching the quarter-finals is possible. "In Ikast, we should gather all the remaining strength and try to win. We have to focus on our own game and prove that we can claim two points in Denmark. Not everything is in our hands, yet we need to believe in a miracle," she says. 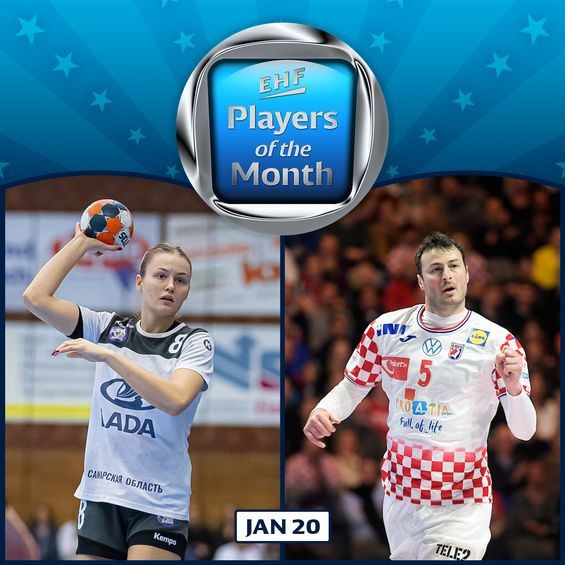 Domagoj Duvnjak showed outstanding performances at the EHF EURO 2020, mainly when Croatia needed him most.

He was a key for the main round victory against Germany, which paved the way to the semi-final. Later on, ‘Dule’ was awarded player of the match in the semi-final thriller against Norway (29:28) and in the final against Spain (22:20) and finally as the Most Valuable Player of the championship.

“It is always a nice recognition to receive an award like this, and this news to become EHF Player of the Month makes me really feel happy.

“Thanks to all, who have voted for me. But of course, I would swap all those awards with the gold medal,” Duvnjak said, when he got to know about being the EHF Player of January.

Funnily enough, only one Croat was previously awarded EHF Player of the Month: Luka Cindric in June 2017 after steering Vardar to their first ever VELUX EHF Champions League title, and in April 2019 for PGE Vive Kielce.

Next Article Poles dominate the podium in Prague

OBITUARY: One of the leading journalists for the EHF over almost two decades, Peter Bruun, passed away on Monday

EHF stages ‘European Handball Convention’ in a bid to resume…

NEWS: Near and mid-term future of European handball at the core of major meeting scheduled to take place in Vienna in September