The EHF has revealed its plans for the future of its club competitions from 2020.

Following the decision to expand the Men’s EHF EURO final tournament from 16 to 24 teams from 2020, proposals for the reform of men’s and women’s top club competitions have now been presented.

The plans form the basis of the EHF’s ongoing tender process for its audio-visual and marketing rights through to 2030. The long-term offering from the EHF has proved to be an attractive proposition on the international sports and media markets, with 25 media companies and agencies considering bids.

Speaking about the proposals, the EHF President, Michael Wiederer, said: “With these changes, the EHF will be able to offer a comprehensive year-round content offering of sporting highlights, with the potential to captivate and enthral fans in one of Europe’s largest sports communities.”

“This is the first time that the EHF has bundled its rights and entered into a tender process, and the strong interest from the market is a clear indication of just how attractive the ‘European handball’ product is.”

With the final formats of the EHF top tier club competitions to be finalised together with top clubs and partners, the EHF’s plans include a comprehensive reform across all levels of top competition.

It is envisaged that the Men’s EHF Champions League will move to a league system, played in a round-robin system, initially involving 12 teams, with the possibility of later growing to 16 teams.

Focusing on the ‘strongest of the strong’, the league will be open to the national champions of Europe’s top national leagues, plus four additional teams.

The new playing system would see the top eight teams qualifying for the quarter-finals and the four winners then progressing to the EHF FINAL4. 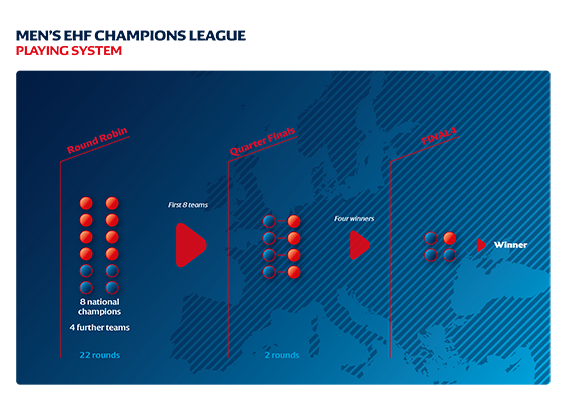 Men’s competitions on the second and third tiers would also be revamped in the plans currently under discussion.

The current EHF Cup would be renamed the ‘European Handball League’ and be played with 24 teams in the group phase, offering more clubs the opportunity to play in European Cup competition.

Teams would compete in four groups, each comprising six teams. The existing Challenge Cup would be renamed the ‘EHF Cup’ and played in a knock-out format. 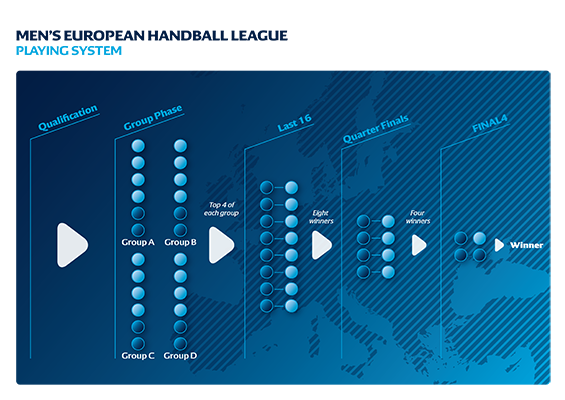 Changes are also proposed across the EHF’s top women’s competitions.

The group phase of the Women’s EHF Champions League would continue to be played with sixteen teams but would be played in two groups of eight, with the top eight teams then progressing to the quarter-finals and ultimately the EHF FINAL4.

The second tier of competition would be renamed the ‘Women’s European Handball League’, and played in the same format as the current Women’s EHF Cup. The current Challenge Cup, would then be renamed the ‘EHF Cup’.

Following the launch of the tender process for the EHF’s audio-visual and marketing rights on 18 September 2017, a total of 25 companies, including 13 media companies and 12 agencies have received the 126-page tender document.

Seven media rights packages and three marketing packages are available and companies can bid for specific packages, a combination or all packages.

The tender process is being handled on behalf of the EHF and EHF Marketing GmbH by the Munich-based media consultancy firm, SN1 Consulting. Deadline for submissions is 15 November 2017.

The signing of a long-term Memorandum of Understanding on 16 October 2017 with Forum Club Handball, the body representing Europe’s top men’s clubs, will pave the way for the introduction of new competition formats from 2020.

The terms of the MoU will see a repositioning of the marketing strategy for top clubs competitions with EHF and club rights to be bundled within EHF Marketing GmbH.

The new agreement secures unity within European handball and will provide a solid basis in order to take the whole of the sport to an even higher level in the future.