Four talking points and other highlights from the weekend

Four talking points and other highlights from the weekend

The penultimate round of the DELO WOMEN’S EHF Champions League main round shed some light on the final questions for the competition.

Also, there were some surprising comebacks that stole the show in the European premium competition last weekend.

Here are the main talking points.

While defences win championships, the attacks are still taking the headlines by storm: 78 games have been played this season and 4,317 goals have been scored for an average of 55.35 goals per game.

This is an improvement of nearly one goal per game since last season, when the teams combined for an average of 54.47.

Moreover, Radicevic has still at least three games to play and could become the player with the most goals scored in a single season since Anita Görbicz hit 133 in 2011/12.

Teams have improved their attacks and found more creative ways to score, as the emphasis grew stronger in attack - even at powerhouses like Györi Audi ETO KC, Brest Bretagne Handball or Metz Handball.

Signs of trouble for Györ?

The title holders were down by five goals with 15 minutes to go against Buducnost, but still found a way to clinch their tenth win of the season, 28:27. The mark of a champion is not all about winning all games during a season, but finding constant ways to clinch important wins in unfortunate situations.

While Györ cruised to six wins in the group phase, their main round was far from impressive. They lack the ruthlessness from last season, both in attack in defence, but they did save five points from difficult situations in this phase of the competition.

Starting from the draw against Brest on home court, 27:27, after being down for most of the game, to clinching crucial wins against the French side (29:28) and Buducnost (28:27), on away court, the Hungarian powerhouse secured the first place in the group, as well as extending their record unbeaten run to 36 games.

However, their weaknesses were there on display for everyone to see. Their attack has been hit-and-miss for large chunks of the games, while their majestic defence clicked only when push came to shove.

This is a warning signal for all sides during the business end of the DELO WOMEN’S EHF Champions League, especially as the Hungarian side look vulnerable once again, despite their stellar roster.

Eight from eight for the quarter-final

There is still one round left in the DELO WOMEN’S EHF Champions League, but all eight quarter-final berths have been decided since this weekend.

After SCM Valcea Ramnicu beat IK Sävehof (28:20) and Vipers Kristiansand lost against Rostov-Don (32:29), the battle for the quarter-final was done and dusted for all teams.

While there is nothing to be changed in group 2, with Györ securing first place after their win against Buducnost, there is still everything to play for in group 1.

The title holders will face CSM Bucuresti in the quarter-final, but the other three places in group 1 have yet to be decided.

French champions Metz will secure the first place if they do not lose against Team Esbjerg in the last game. The Danish side can still top the group if they beat Metz next week and Rostov fail to win against FTC-Rail Cargo Hungaria.

Esbjerg reduced their chances to win the group by losing to FTC on Sunday, 26:25, probably due to a lack of experience at this level.

Can Valcea be back at their best?

The new incarnation of the Romanian club was back in the European premium competition after a lengthy lay-off and secured a quarter-final berth with one round to go, despite starting the main round with zero points.

Valcea still look far away from their contender aura they held between 2007 and 2013, but the passion is still there and their raucous fans ensured that the Romanian champions lost only against top sides like Buducnost and Györ on home court.

The Romanian champions scored the second lowest number of goals in the main round, 216, nine more than Sävehof, but they have the strongest defence, conceding only 275 goals between their 11 games played this season, or an average of 25 goals per game.

Missing key players like Alicia Fraga Fernandez in the games against Krim and Sävehof hurt them, but the Romanian side can surely exert some pressure in the quarter-final, despite finishing fourth in their group and meeting either Metz, Rostov or Esbjerg in the next phase of the competition.

A DELO WOMEN’S EHF FINAL 4 berth looked like a farfetched objective for Valcea this season, but they can surely be an underdog next season if they retain their core.

The winter seems over in large parts of Europe but you can still find a lot of snow in Norway. It was not a proper snow ball fight for the Russian powerhouse, but players still found the snow compelling before their 32:29 against Vipers Kristiansand.

“We achieved what we dreamt of, we are now in the quarter-final. Everything that happens from now on is a bonus.”

Having started the main round on zero points, Valcea have now sealed their quarter-final berth with a match to spare. The standout achievement of his team has made coach Pera proud, and deservedly so. 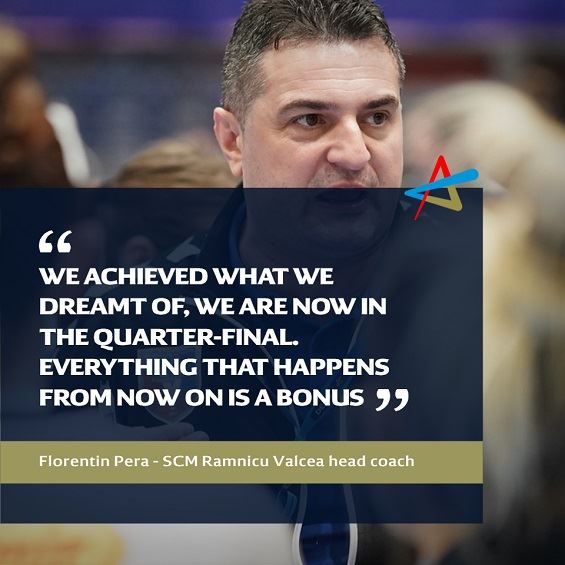