14 teams have progressed to the next phase of the VELUX EHF Champions League as the group phase drew its curtains on Sunday.

A total of 10,457 goals were scored over the 176 games. We recorded an unprecedented winning streak at this level and one team hit the 100-win milestone.

We also have a first look at the ties that will be played in the Last 16.

Here are this week’s talking points.

After the final round of the group phase was completed last week, we now know the six games that determine the teams which will join Barça and THW Kiel in the quarter-final.

While Dinamo Bucuresti may be unbeaten in all of their 12 games this season, the Romanian champions will have their work cut out against Paris Saint-Germain HB, as the French powerhouse are clear favourites to proceed to the next phase.

RK Celje Pivovarna Lasko, progressing to the Last 16 despite winning only three games, have a mountain to climb against PGE Vive Kielce, with the Polish side emerging as favourites after winning home ties against THW Kiel, Veszprém and Vardar this season.

Title holders Vardar are paired with MOL-Pick Szeged, who will be targeting their fourth quarter-final berth in the last six seasons. Meanwhile, FC Porto Sofarma look to stand a chance against Aalborg Handbold, with the last tie of the phase seeing SG Flensburg-Handewitt face Montpellier HB in what could prove to be the most balanced game of the series.

All in all, we are looking at six fiery ties. And the quarter-final outlook already hints that we could have a repeat of the PSG vs Kielce tie that sent shockwaves through the VELUX EHF Champions League last season.

A win was mandatory for Kielce against Kiel to secure the third place in group B and a tie against Celje in the Last 16 - and they did just that. Kielce jumped to a 32:30 win against the group winners, their eighth of the season.

Szeged (97 wins) and PSG (88) are next in line, and the Hungarian side could already reach the milestone in the current season.

WATCH: A history-making moment for Quan Wang of @RKZagreb who becomes the first ever player from China to score in #veluxehfcl history! Congratulations! pic.twitter.com/B4Xrt0EMDC

A record season for Barç­a

It did not look pretty for Barça after losing the first game of the season against Szeged, 31:28, as the Spanish side had their flaws, despite of a stellar summer on the transfer market.

But nobody could predict Xavi Pascual’s side overcoming all difficulties and creating a 13-game winning run to seal the first place in the group, with convincing wins against PSG, Szeged or Flensburg.

No team has ever embarked on such a run in the VELUX EHF Champions League before, as the previous record, 12 wins in a row, was held by three teams: Ciudad Real, Telekom Veszprém and Barça, as they won all games between April 2011 and February 2012.

Now, the Spanish powerhouse has set a record and they can continue this run in the quarter-final phase, where they will meet the winner of the Last 16 tie featuring Flensburg and Montpellier.

Moreover, no other team has ever finished with a positive goal difference of over 100 goals, like Barça have done this season (+105). The Spanish champions have come very close to tying their scoring record from last season, 486 goals in 14 games, scoring 485 this outing.

How did Dinamo build an unbeaten team?

Two two sides from the 12 that started the group phase in groups C/D have advanced to the Last 16. Despite finishing second in group D, behind Dinamo, Plock proved too experienced and too strong for group C winners, Bidasoa Irun, ousting them after a 51:49 aggregate win.

Plock secured a Last 16 berth for the fifth time in the last seven seasons and will face Veszprém, as they are trying to clinch the eluding quarter-final spot they have always been dreaming of.

However, the outstanding performers from this phase were Dinamo Bucuresti. The Romanian side earned their maiden Last 16 berth after a 12-game unbeaten run, as they are the only team not to concede defeat this season in the European premium competition.

With a mix of players from nine countries and three different continents, the Romanian champions avenged last season’s defeat against Sporting with a 52:49 aggregate win.

It is a story about persistence, diversity and unity, as both players and fans – 1,000 of them made the trip to Lisbon last week – joined as one and focused on the task at hand.

2,500 raucous fans created one of the most beautiful settings this season, yet Dinamo’s path to glory will be hard. The Romanian side face PSG in the Last 16, a team whose depth and talent should be enough to stop Dinamo’s unbeaten streak.

Croatian playmaker Igor Karacic has dazzled with his goals both in the VELUX EHF Champions League and the EHF EURO this season and showed he has also a good sense of humour. Before the 32:30 win against THW Kiel in this round, Karacic has also surprised goalkeeper Andreas Wolff with a goal in training. Where is Andi? In Igor’s pocket?

50 fans came to Dinamo’s last training before the crucial second leg of their play-off against Sporting to show their support. 2,500 more were in the Dinamo Arena during the game, as the great support could have been easily mistaken for a South American ‘tifo’ display. Buoyed by their superb fans, Dinamo took a 26:24 win and progressed to the Last 16 phase.

“It is a magical night with a magical victory. We made history in Romanian handball. What will happen next is a bonus for us, we have nothing to lose against PSG.”

What an impressive run Dinamo are having in the Champions League. They stretched their unbeaten run to 12 matches, downing Sporting in the play-off, and entered the Last 16 for the first time in the club’s history. Next up: one of the big title favourites, PSG. 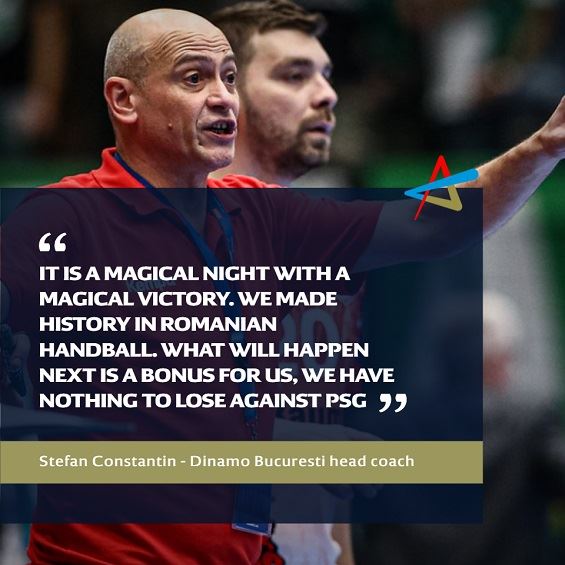 Next Article Four talking points and other highlights from the weekend