Like at the Men’s IHF World Championship 2019 on home ground, Denmark raised the trophy again in Cairo on Sunday night.

After a hard-earned but well-deserved 26:24 victory in the all-Scandinavian final against Sweden, Denmark took their second gold medal on the global stage, becoming only the third country in the last 50 years to successfully defend a world title, after Romania did it in 1974 and France in 2011 and 2017.

Denmark have been in the final four times in the past 10 years, but lost their first two efforts against France (in 2011) and Spain (2013).

One year after their early exit in the preliminary round of EHF EURO 2020, Denmark extended their winning streak at World Championships to 19 matches - a record.

Winning each match since their Last 16 defeat to Hungary in 2017, Denmark passed the previous best mark of 18 straight wins, set by France between 2015 and 2019.

Denmark’s key player was once again Mikkel Hansen, who was awarded the MVP title, an honour he also received at the World Championships in 2013 and 2019.

Their second straight world title gives Denmark another boost ahead of the Tokyo Games, where they are set to defend their Olympic title from 2016.

Sweden appeared in their first final since 2001, when they lost to France, but came close to their fifth title on Sunday as Denmark could not cast them off easily. Sweden will co-host the next world championship with Poland in 2023.

The first six positions in the final ranking were occupied by European teams, ahead of hosts Egypt and Qatar, whose left back Frankis Carol was the event’s top scorer, with 58 goals.

A pair of brothers made the day for Denmark within 25 seconds: With the score 25:23, outstanding goalkeeper Niklas Landin saved a penalty from Hampus Wanne, before Magnus Landin scored on the other end of the court for the decisive 26:23 in the dying minute of a thrilling final. The Landins had won the VELUX EHF EURO 2020 with THW Kiel last month and now became world champions together again, for the second time after 2019.

The final was on the edge for 60 minutes, with Niklas Landin (15 saves) and MVP Mikkel Hansen (seven goals, and 11 in the semi-final against Spain) again the decisive players. 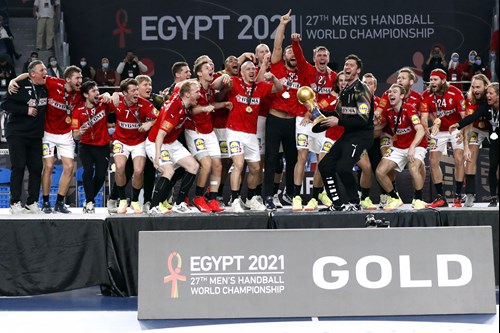 Sweden were tactically perfectly prepared for the Danish match play and were 12:10 up at one point, and they seemed able to defeat Denmark again after their semi-final triumph at EHF EURO 2018.

But the momentum changed after the break, also thanks to Nicolaj Oris, who scored five from five, and young Jacob Holm, who netted four crucial goals in the important middle part of the second half.

A total of 16 saves from goalkeeper Rodrigo Corrales and 14 goals from the Dujshebaev brothers, with Alex netting eight and Dani six, were key for Spain as they earned their third world championship medal in the last 10 years.

The EHF EURO champions took a 4:0 lead, which France struggled to recover from for a long time. However, led by their top scorer Hugo Descat (seven goals) and Barça line player Ludovic Fabregas, the only Frenchman in the All-star Team, France looked like turning the match around at 16:15 right after the break - but then Corrales shut up his shop and Spain ran away to a decisive 26:20 lead. 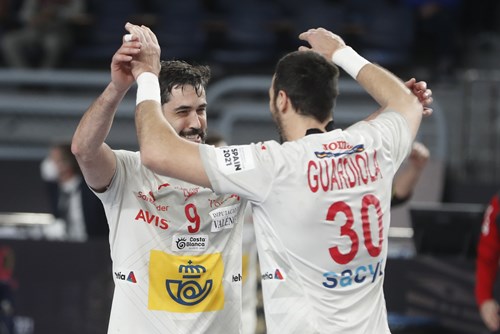 Spain lost only once in Egypt - in the semi-final against Denmark - but the players celebrated their bronze medal like a golden one, knowing that this might have been the last World Championship for the golden generation.

“Despite the loss in the semi-final we are really happy. It is good to be on the podium again,” Corrales said. Already on Thursday, he will face five of his Spanish teammates again when his club Telekom Veszprém HC will host Barça in the EHF Champions League Men.

Led by Mikkel Hansen and line player Magnus Saugstrup, Denmark were ahead throughout in the match against Spain. The EHF EURO champions reduced the gap to just one goal four times in the second half but Denmark decided the match with three straight goals from Mathias Gidsel at 30:29.

Andreas Palicka, who was named in the All-star Team, helped Sweden with 11 saves as the Scandinavian side eased past France. The fully rejuvenated Swedish team was ahead against the much more experienced French side almost throughout, and had their best scorer in Hampus Wanne, who netted 11 times.

All photos courtesy of IHF

Next Article Kadetten welcome Löwen to Switzerland for double-header