“In Cologne anything can happen”

With four heavyweights playing, no easy draw would be possible for anyone. All teams involved in the VELUX EHF FINAL4 2020 were aware they would be handed tough opponents for the semi-final on 28 December in LANXESS arena in Cologne.

Tuesday’s draw decided that Barça will take on Paris Saint-Germain Handball and that THW Kiel will be up against Telekom Veszprém HC.

“We go to Cologne to try to win it”

“On this level it is very unpredictable,” THW Kiel left wing Rune Dahmke told Chris O’Reilly in an ehfcl Instagram Live interview shortly after the draw.

The right wing from his upcoming opponents, Gasper Marguc, agreed.

“It is really hard to predict anything,” the Veszprém player said. “Of course, we want to win. We go to Cologne to try to win it.”

Kiel played Veszprém in Match of the Week of round 5 late October in what has been one of the highlights of the EHF Champions League Men 2020/21 season so far.

“It was a really, really exciting game in Kiel,” Marguc said, pointing out that both teams are scheduled to meet again, in Hungary this time, even before the EHF FINAL4.

“Playing them three times in two months, I guess there are no secrets at the EHF FINAL4,” Marguc said with a smile.

“There are not too many secrets between the teams. It was a really fast, a really good game,” said Dahmke, adding he also expected a similar kind of match in Cologne in December.

“It is the biggest stage in our sport”

Kiel and Veszprém ended their clash with a 31:31 draw; it was the second home match the German champions failed to win in the current group phase, after they had been upset by HBC Nantes (35:27) in round 2.

“We always bounce back, that shows the character of this team,” Dahmke said about the three-time EHF Champions League winners.

The left wing is already looking forward to his club’s return to Cologne for the first time since 2016.

“It is the biggest stage in our sport in the club scene. It is incredible to play in the LANXESS arena,” said Dahmke, and even though this time no 20,000 fans will be attending, “I think it still feels the same as this is the EHF FINAL4.” 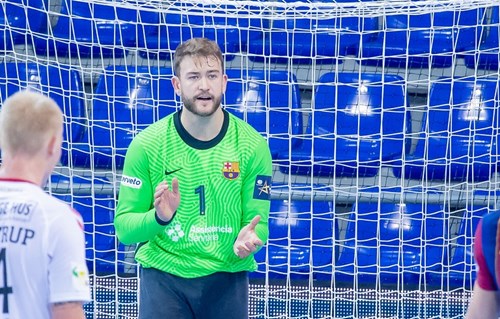 While Kiel and Veszprém are preparing for a true challenge in their semi-final, the same goes for Barça and PSG.

“It is going to be a tough game,” Barça goalkeeper Gonzalo Perez de Vargas said.

“We managed to win against them twice last season, but the squad has changed so it is totally different in Cologne,” he said. “Anything can happen.”

While Barça and PSG don’t share the same group in the 2020/21 season and therefore will not play each other before the EHF FINAL4, Barça will meet both Kiel and Veszprém in the upcoming weeks.

“I am pretty happy with the season so far,” said the goalkeeper of Barça, the only team in the EHF Champions League 2020/21 yet to drop a point.

“But we will see where we really stand when we play Kiel and Veszprém.”

Barça are the record eight-time EHF Champions League winners, but have failed to claim the title since 2015.

The Spanish champions are eager to change this in December, first by beating PSG and then winning the final against Kiel or Veszprém.

Or, as Perez de Vargas put it: “Even if it is still more than a month away, we already think about how to be in shape and how to be ready to win this EHF FINAL4.”

Next Article Handball and hummel: the strategy behind the partnership