Lassource and Brest comfortable flying under the radar

Lassource and Brest comfortable flying under the radar

Let us play a game. At any given DELO WOMEN’S EHF Champions League match this weekend, ask the fans which teams they think will be playing the DELO WOMEN’S EHF FINAL4 in Budapest in May. They will surely list Györ, Buducnost and Rostov, maybe Bucharest, Metz or Esbjerg.

But chances are slim that the name Brest Bretagne Handball will pop up in the conversation, despite the French side not losing any game in the competition since the start of the season.

“That suits us fine! We’re happy being under the radar and, up to a point, I get why we are. Prior to this season, we had no name in the European circuit,” says Coralie Lassource, the team’s left wing and captain.

No pressure to start the season

The historical record for Brest was thin. This season is the club’s third participation in the Champions League, and only in 2018/19 did they qualify for the main round for the first time.

All in all, Brest had only won two games in the competition before this season – which might ultimately prove just as well.

“We did not have any pressure when we started our Champions League campaign. There were a lot of new players. Some even called us a new team, so we did not know what to expect,” says the 27-year-old captain.

“Even now, we’re not giving away any goal that we have because we know that if we don’t reach it, we will be disappointed. So, we’re just taking one game at a time and we’ll see where it leads us.” 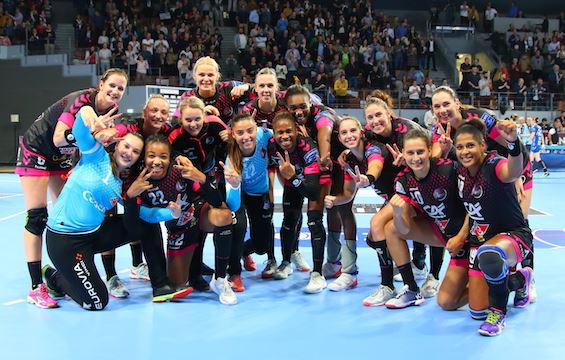 For Lassource, this season – her first in the Champions League – is already a success. She was playing with Hungarian side ÉRD for the last two seasons, but felt she wanted to battle with the best.

“That’s the main reason I joined Brest, to play this competition. It was like, since I had not played it, something was missing,” she says. “I don’t take it for granted. I know how much work you have to put in to be a good Champions League player. But for a first time, to have such a season, it’s huge.”

What is even bigger for the France national team player is for her to live this first Champions League as captain. Lassource admits that she was surprised when her teammates elected her at the beginning of the season, but her experience must have convinced them to give her the armband.

“This is a huge source of pride, of course, and a sign of trust. I always give 100 per cent on the court. I think everybody wanted to have a new face as captain, but I didn’t expect to be elected to be honest,” she recalls.

“Beating them on Sunday would be crazy”

Despite the injuries that her team are suffering at the moment, Lassource will try to lead Brest to a high-profile win against Györ on Sunday night. In the first leg, the French side took a point from Györ’s fortress in Hungary – the first team to do so since FTC one year ago.

“At first we were a little bit disappointed, since we were ahead by six at some point. But then, when you realise that you drew in Györ, that remains a huge performance,” concludes the Brest captain.

“We know that beating them on Sunday would be crazy. But no matter the result, we’ll try to remain under the radar.”

It is not certain that this tactic will work this time…

Previous Article Brest and Györ tough it out for first place

Foppa: “I would not have bet on us beating all those top tea…

Brest and Györ tough it out for first place

GROUP 2 PREVIEW: This weekend sees the only two teams still with a flawless record in the competition face each other in France, with first…