SG Flensburg-Handewitt go into the new year full of confidence 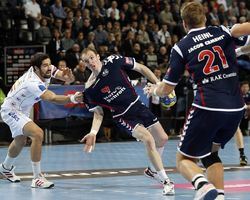 SG Flensburg-Handewitt go into the new year full of confidence

After the 27:25 victory in Montpellier, which nobody predicted, SG Flensburg-Handewitt were clearly proud of their achievement. "The whole handball world has noticed our victory," announced coach Ljubomir Vranjes.

"Many have congratulated us." Unexpected, exciting, special were some of the superlatives used to describe the triumph in France.

"We played smart and everybody who played, played their best," said right wing Lasse Svan Hansen.

"However, Montpellier didn´t were not at their normal standard. Against our defense they had serious problems.

“If they didn´t run counterattacks, they would have scored no more goals."

"Under the difficult conditions which we have had, we can be absolutely satisfied," says manager Dierk Schmäschke.

"The VELUX EHF Champions League is associated with long trips, but this team has coped well so far."

"Three games before the end of the group phase, we have reached the Last 16 in a tough group," says left handed Holger Glandorf.

"We should be satisfied with our achievements." But Flensburg are not looking towards the new year and the final three VELUX EHF Champions League games just yet. "We have a full schedule until Christmas," pointed playmaker Thomas Mogensen.

"After the break we'll see in February what will happen."

If Flensburg win all three remaining games, then they will at least secure second place. Should the Russians take points from HSV then Flensburg could top the group.

In February the squad is expected to be stronger than now. New signings Olafur Gustafsson and Florian von Gruchalla are then eligible to play, Lars Kaufmann should back in action after his knee operation.

"Beginning in February," says Ljubomir Vranjes, "we have a really strong team that will be even stronger than now."