The quarter-finals provided handball fans across the continent with plenty of excitement, so it is time to nitpick what went good and what went wrong throughout the six clashes played over the last two weeks.

Here are six takeaway after the quarter-finals.

Can Vipers join the club of back-to-back winners?

Since the introduction of the women’s version of the EHF FINAL4 in the 2013/14 season, only one team has managed to win the title in consecutive years: Györ, who went on a three-season winning spree in 2017-19. In the pre-EHF FINAL4 era, Hypo Niederösterreich, Slagelse DT, and Viborg HK also lifted the trophy in consecutive years.

Now, another team might join this elite club of back-to-back winners: last season’s champions Vipers have qualified for Budapest with a commanding 65:49 aggregate win over Krim Mercator Ljubljana, giving themselves the chance to retain their trophy. The Norwegian side seems up for it: they will arrive in Budapest next month having won 10 of their last 11 matches in the competition and having scored, by far, the most goals in the quarter-finals.

A new champion crowned in Budapest?

Statistically, there is a 50-percent chance of a maiden EHF Champions League winner this season: Metz and Esbjerg have not lifted the trophy before. Metz will enjoy only their second appearance at the EHF FINAL4, after 2019; Esbjerg have even never been there before.

So far, CSM Bucuresti have been the only team the win the title upon their visit to the EHF FINAL4, in 2016. But Esbjerg have been nothing short of superb all season. And Metz have been further strengthened with the mid-season arrival of centre back Grace Zaadi.

Brest Bretagne Handball have been a bogey team for Györ in recent seasons. Before their second-leg match of the quarter-finals last Saturday, Györ and Brest had drawn aft er 60 minutes in five of their previous six matches – though Brest went on to turn one of those ‘draws’ into a dramatic penalty shootout win in their semi-final at the EHF FINAL4 last season, which ended Györ’s 55-game unbeaten streak in the competition.

Avenging that painful defeat was one of Györ’s objectives this season, but the 21:21 draw in the first leg against Brest had all the markings of another upset in the second leg. Calm, composed and displaying sheer tenacity, grit and strength, Györ won the decisive leg in emphatic fashion in Saturday’s Match of the Week. With a nine-goal outing from centre back Stine Oftedal, the Hungarian powerhouse took a 35:23 win. No other team has more EHF FINAL4 berths than Györ – seven – with Buducnost and Vardar coming the closest with four appearances each.

One goal can change anything in handball and bad luck has engulfed CSM this season. The Romanian side lost as many as four games in the last second, including the first leg of the quarter-final against Team Esbjerg (26:25). CSM then missed a return to Budapest for the first time in four years following the 27:27 draw in the second leg in Denmark last Sunday. Last season, CSM went down in the quarter-finals on away goals, after a 52:52 aggregate draw against CSKA.

CSM now face a transitional summer with five players leaving, including the only two players who were left from the 2016 title-winning squad: goalkeeper Jelena Grubisic and right wing Carmen Martin. who will definitely be missed in Bucharest by the loyal fans. 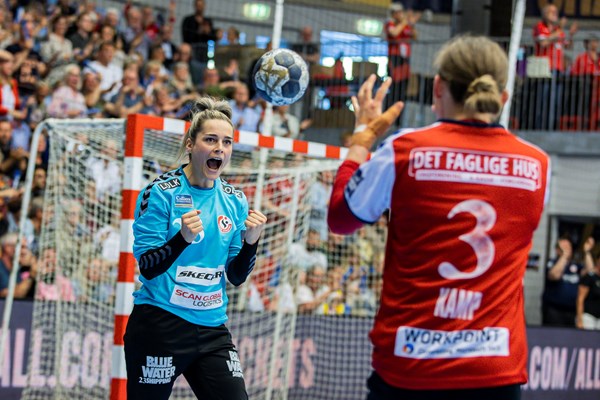 A sturdy defence, which conceded only 24.8 goals per game, has been leading the charge for the trophy, with Esbjerg registering a single loss in 16 games – away at last season’s finalists Brest. At home, Esbjerg have been pitch perfect, with six wins and two draws, but their lack of depth and experience could be exposed in Budapest.

The hunt for the top scorer title is on. The leader, however, is out of the competition, as left back Cristina Neagu had her EHF Champions League season with CSM come to an end in the quarter-finals after 110 goals. Neagu still holds a 14-goal advantage over former teammate and current Vipers right back Nora Mørk, and a 24-goal advantage over Esbjerg’s Henny Reistad.

Neagu has raised her career tally to 910 goals in the EHF Champions League, 106 fewer than record holder Anita Görbicz. If the Romanian’s lead in this season’s standings remains unaffected, she becomes only the third player to win the goal scorer award three times, after Natalia Morskova and Nataliya Derepasko.

Next Article EHF mourns the passing of Bengt Johansson

SUMMARY: Team Esbjerg joined Györi Audi ETO KC and Vipers Kristiansand as the teams to progress to the EHF FINAL4 from the quarter-finals

Three tickets to Budapest up for grabs

QUARTER-FINAL PREVIEW: Six teams from six different countries will fight for three EHF FINAL4 spots in the first leg of the quarter-finals

FACTS AND FIGURES: Here are the numbers that matter before the EHF Champions League Women heads into its quarter-finals

NEWS: 30 April and 1 May will see the first leg of the EHF Champions League Women quarter-finals take place with the return leg on 7/8 May

Summary: Coverage of the final round of the group phase in the DELO EHF Champions League 2021/22