Smajlagić: "We deserve a place in the Last 16"

Smajlagić: "We deserve a place in the Last 16"

HC Bosna Sarajevo Coach Irfan Smajlagić is optimistic about his team's possibility to reach the Last 16 in the VELUX EHF Men's Champions League. After their home victory against St. Petersburg, Bosna now only need to beat HCM Constanta in their upcoming home match to achieve their best ever CL result.

ehfCL.com: What went wrong in the first part of the season?

Irfan Smajlagić: Our biggest problem is getting into the rhythm of the games, swinging between the domestic league and the VELUX EHF Men's Champions League. My players must be in top shape to be able to fulfil all these demands. And that is why we had some ups and downs in first part of the season. Our goal is to improve our game play. Then, I think, the rest of the competition will be very interesting. 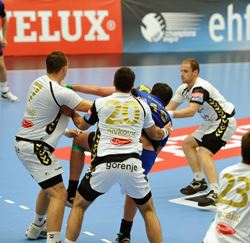 ehfCL.com: Every year Bosna keeps rebuilding the team very carefully. Is there still a lot of work to do?

Irfan Smajlagić: In this year we are going into the final selection of players. We brought in a dozen players that we added to our eight standard players. That was risky, as it happened that part of the team could not keep up the pace. Therefore the outcome of our CL games was not only successful, like it was the case in our away games against Zagreb and Ciudad Real. So we will have to work on balancing the performance of the team.

ehfCL.com: How do you see your chances to proceed from Group D?

Irfan Smajlagić: I think that we have created a good foundation in our VELUX EHF Men's Champions League group. With one more home match to play in Sarajevo we have fate in our own hands. If Flensburg defeat St. Petersburg, even a victory with the margin of only one single goal will be sufficient for us to advance to the next stage. Considering the fact that we have showed a good performance in some of the matches in which we were defeated, I am convinced that we deserve to go to the round of the Last 16. I believe that we will win against Constanta in Sarajevo and advance.

Next Article Obrvan: “Every player should play in both directions“

SUMMARY: CSM on top of group A, Metz secure the top spot in…

MOTW REVIEW: FTC-Rail Cargo Hungaria secured their place in the play-offs with an excellent fight back against SG BBM Bietigheim, taking a 2…

GROUP B REVIEW: Anniken Obaidli and Eli Marie Raasok led the Norwegian side to a historic spot in the play-offs

Gonzalez: “People won’t be happy until you win the Champions…

INTERVIEW: The PSG head coach and star player Nikola Karabatic have extended their contracts with the Paris club